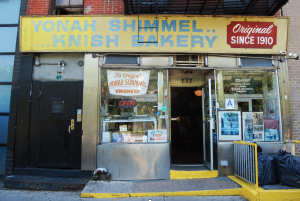 If you’re looking for a meal filled with originality and history, there is one particular eatery unlike any other in New York city. Down on the Lower East Side on the corner of East Houston and Ludlow is a small knishery that has stayed true to its history for over a hundred years. Upon walking into the doors of Yonah Schimmel’s Knishery, one is instantly transported to a different era. Very few restaurants have managed to remain authentic or keep tradition after so many years, but Yonah Schimmel’s is the exception.

The small Knishery in lower Manhattan is currently operated by Ellen Anistratov, a 6th generation descendant of the original owner, Yonah. Nectar News sat down to talk about the origin of Yonah Schimmel’s and the cultural influence the knishery has brought to New York City.

NN: Can you give us some history on when the business was founded and how your family came to acquire it?

EA: Yonah Schimmel came to the United States with his wife in 1890. He was a scribe and wanted to teach people spirituality, but there was no money in it due to a large number of immigrants moving here. Yonah’s wife started to make Knishes, to help during those times. That’s what she knew best. The Yonah Schimmel Knish was the first knish that came to the United States, and it was invented by his family.  My family is a 6th generation descendant from Yonah Schimmel and the business has stayed in the family tree. 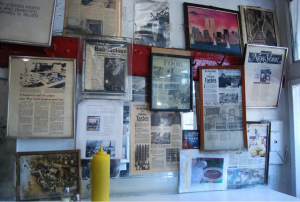 Upon walking into the doors of Yonah Schimmel’s Knish Bakery, articles and photographs give visitors some history of the bakery.

NN: For those who are not familiar with what a Knish is, could you describe what it consists of and how it’s made?

EA: A knish is a Jewish word for dumpling. I always say you can make whatever you want, you can call it whatever you want, but an original knish is Yonah Schimmel’s and it is round and baked. There are different varieties, but a basic knish has a base that consists of potato or something mixed with potato. Say however if we have a spinach knish or a mushroom knish, the knish would be potato with spinach or mushrooms, onions, salt, and pepper wrapped in very thin dough. A knish is also always round and baked.

NN: Are all traditional Knishes made with different ingredients or was adding a variety of flavors Yonah Schimmel’s twist and a way to accommodate to different customer taste?

EA: A knish is a Jewish food that traditionally starts with just potato and kasha. We began adding spinach to knishes and then came other flavors. There truly is something for everyone since we also have sweet knishes like cherry, blueberries, and apple cheese. We even have daily specials like a pizza knish, jalapeno with cheddar or mozzarella, pepper and onion, and roasted garlic and onion. Overall we have over 20 different kinds of knishes all of which we invented. 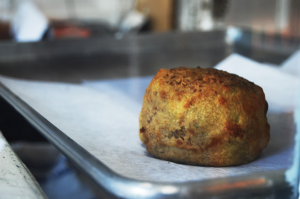 NN: Could you give some background on how the Knish is a culinary symbol of Jewish culture and what makes Yonah Schimmel’s Knishery different from other knish bakeries

EA: Every culture has a different dumpling and their own version of it and knish is a Jewish word for dumpling. There are very few knish bakeries around, and Yonah Schimmel’s is the original. I always say, if you haven’t had Yonah Schimmel’s knish, then you’ve never really had a knish. There’s a saying that Yonah Schimmel is the granddaddy of all other knishes. All of our knishes are handmade, round, and baked its gourmet food. We make all of our knishes right downstairs and this is how we are completely different. Our knishes are handmade without machines and come from downstairs straight up to here. 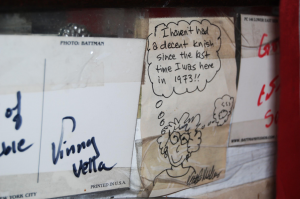 Yonah Schimmel’s is no ordinary place, the knishery receives praises from visitors and influencers from all over the world.

NN: You’re one of the oldest Knish bakeries in the United States, after so many years, how do you keep the tradition of the original Knish the same?

EA: Everything you see here is an original. From the countertops to the tables and ceiling, they’ve been maintained throughout the years. Nothing like this exists today. We make knishes that are good and healthy, always baked and never fried.

NN: In a New York street that’s ever-changing, how does Yonah Schimmel’s keep a piece of New York the same?

EA: You don’t have to be Jewish to eat a knish, anyone can enjoy a knish. I have a slogan that says one taste, one world, one knish. Since Yonah Schimmel was a scribe, he was connected to the Bible. His mission was to spread biblical knowledge, and I think he put that same energy towards the knishes. That same energy continues here. 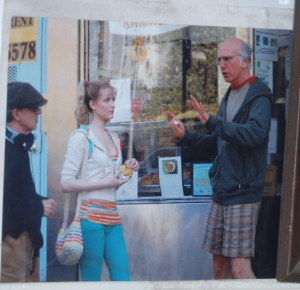 NN: What can we expect to see in the future for Yonah Schimmel’s Knishery?

EA: My dream for years has been to start Yonah Schimmel’s Knishery franchises and to have different locations. We want to bring original knishes all over the world, with knishes always made in-house, round, and baked.

NN: What Knish would you recommend for someone trying one for the first time? 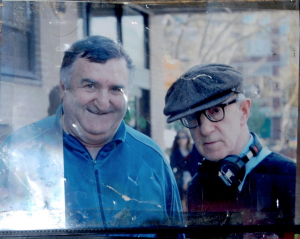 NN: Yonah Schimmel Knishery has become a New York landmark, from the bakery’s dining room being featured in movies to celebrities and politicians frequently spotted onsite with a Knish on hand. How does it feel to be part of New York’s culture?

EA:  There’s a saying that it’s a requirement to eat a knish if you want to become a New York politician. It feels great, it feels like we are representing a culture. 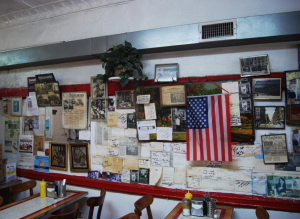 Articles and signatures fill the walls of Yonah Schimmel’s Knish Bakery shaping the years of history in the famous bakery.

Celebrities, politicians, influencers, and locals alike frequently visit the bakery to get a taste of their famous knishes. Any visit to NYC is incomplete if you don’t have a Yonah Schimmel’s knish, so stop by at their location in 137 E Houston Street to experience an original Jewish comfort classic, the knish. While there, don’t forget to take a look at the decorations on the walls for a history lesson!

Visit Yonah Schimmel’s Knish Bakery on the lower east side or online at http://www.knishery.com/

Gray Panthers – A Movement Based On A Struggle Against Ageism