The seed of art and revolution in the Village 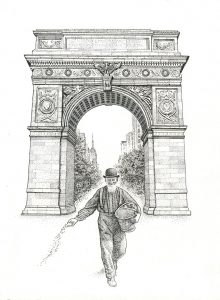 I often gaze upon these old stones of Greenwich Village and think of those who once walked here.

Our moment cannot transform their inspiration into mere real estate — dollars not sense. They can never fully scrub the taint of rebellion and art from our Village.

For 20 years, the great University sought to evict an artist from his studio at 3 Washington Square, but the giant outlived them. A journalist came to interview the old man, and noticed a hat hung on the spokes of an etching press.

“How long has that hat been there?” asked the visitor.

Across the park, 80 Washington Square West was once called the Benedick, after the confirmed bachelor in “Much Ado About Nothing.” The place was designed for bachelors and artists, and an all-night elevator operator catered to their irregular hours. Although no sinks were provided, in order to “keep out sewer gas.” Architect Stanford White and sculptor Augustus Saint-Gaudens were moved to open a basement venue there called “The Sewer Club,” while Albert Pinkham Ryder painted upstairs in exquisite squalor, obsessively reworking his mystical canvasses, even baking them in an oven until his pale horse carried the rider of death into eternity. A neighbor, Winslow Homer, packed up and moved to 10th St.!

I was on deadline with an illustration when the first modern 1980s-style bus I’d ever seen pulled up to my stop on Sixth Ave. It was early evening, and yet the bus was empty, air-conditioned, surreal. A single passenger sat in the middle of the back bench, a tiny old man with glasses and a little hat, whom I immediately recognized as the painter Raphael Soyer. I eagerly presented my illustration, a drawing of my girlfriend, nude, holding the Scales of Justice. I named it “Every Law Not Based On Wisdom is a Menace to the State,” after an inscription at the Madison Square Courthouse.

Soyer, the great realist of Union Square in the 1930s, examined my drawing like an old grandpa.

“From this, you earn a living?”

And what of my old friends, whom nobody ever heard of?

For example, the radical pamphleteer, who attended each Labor Day parade, seeking a spark of revolution. One year, he waited hopefully as a throng of unionists marched toward him with a thunderous chant. Boom! Boom! Boom! Boom! What could this deliciously angry roar be? Alas, he confessed, it was merely the Fishmongers Union chanting, “Eat Fish! Eat Fish!”

Or the Jewish artist who only painted Native Americans, and sold them for years at the Washington Square Outdoor Art Show. In great confidence, he revealed his mother’s last words.

“So? When ya gonna stop paintin’ them Indians?”

I exhibited my etchings at that art show for years. Sometimes, I showed up sleepless, with fresh-off-the-press New York Times or Daily News illustrations I had done. No matter — I’m sure I was best remembered for my parents.

My father, Irving, a free-thinking subway conductor, opined that I was there strictly for “the glory,” meaning girls, and stood guard proudly, until my mother, Blanche, arrived. The two couldn’t stand each other, but the Irving and Blanche show was good entertainment for the general public. The sight of a wild-haired artist being nagged and cajoled by “The Jewish Mother from Central Casting” was a Greenwich Village classic.

One extremely hot day, Blanche arrived with her flamboyant friend Belle, a former Brooklyn showgirl, who sometimes dressed in layers of her own creations, embellished with colorful costume jewelry and plastic fruit.

Belle was on a mission. The 29-cent cans of tuna fish, which my mother had scored at a bazaar, were going to be foisted upon me in public, at the outdoor art show! The show was almost over, and I was fried, but Belle was shouting, “Harry, take the tuna! It’s good tuna!”

My future wife, Monica, a classical musician from St. Paul, was there to smooth things over, when bleary-eyed, I noticed a familiar figure walking in the street, as if to avoid notice. In spite of the vaporizing heat, the apparition was bundled in a leather bomber jacket, hoodie and Ray-Bans. He was accompanied by a young businessman in a suit, perhaps a record macher, who glared at me with daggers as I approached, my hair and sweat flying wildly, and eyes bugging out.

Bob Dylan, cool in his hoodie, stopped in his tracks.

“IT’S YOU! I ALWAYS WANTED TO MEET YOU!” I bawled most humbly, dropping to my knees.

It occurred to me that my wild attack might have stirred some consternation in Bob. Perhaps the leather jacket was bulletproof! Maybe he was afraid of people like me!

“I’m an artist, here in the show. I was Phil’s friend,” I explained, rattling off the name of the great folk singer Phil Ochs, as well as a few other mutual acquaintances, for cred. “You’ve given me so much, I’d like to give you something.”

“All right, all right,” said my hero, in that characteristic Dylan voice. So there I was, as if in a dream, escorting my friend Bob across the street to see my work.

Bob walked past the two old Jewish mothers, with the walker and the shopping bags full of tuna fish, and cast an approving glance at Monica.

“She’s a musician from St. Paul,” I said proudly.

Then I noticed that the show was already over. I was the only artist left, and my burlap-and-chicken-wire rig was empty. All of the framed drawings and etchings were already packed in milk crates, in the back of my father’s car.

Before I knew it, Dylan was poking through the trunk, looking at framed etchings. I proudly pulled out my largest print, a nude with the Colorado Rockies in the background called, “Yeah God.”

“No, not that one,” Bob said, still looking.

At this point, Blanche realized that I was going to give an etching away — for free! She pulled up behind Dylan, with her walker, and launched into a spirited pantomime.

It’s difficult enough to approach the voice of your generation and pull him aside to look at your work. With Blanche on a rampage, and Belle chanting the tuna fish mantra, I was lost.

Dylan then picked up a framed drawing I had done for the Washington Post. It wasn’t a multiple or a print, it was an original drawing of Gorbachev and Reagan at the first détente. The two world leaders were depicted in profile, looking up at a starry sky, beyond a wall ringed with missiles.

With my mother gesturing wildly behind Dylan’s back, I became confused. I’d worked on that drawing, sleepless, for several days. It was one of a kind. Was Dylan just being polite? Would it end up in a trash can two blocks away?

He carefully placed Reagan and Gorbachev into the trunk of Irving’s car.

I kept insisting to Monica that “I’ll be back” was a mystical remark, that there was deep meaning to it. Nah, she said, it’s just something that folks in the Midwest say to salespeople when they want to leave.

I don’t know. I still think he’ll be back.

Endangered: The Eco-Musical with a Powerful Call to Action