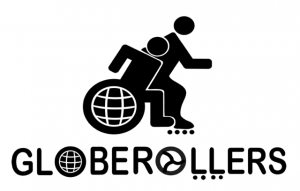 Traveling Globerollers, Madeline Rhodes and Roxanne Schiebergen, are changing the world one stair case at a time. In an effort to raise awareness about the lack of accessibility in the world these young FLOBEL Advisors roll the globe, one by choice, the other by fate. In a weekly blog, the Globerollers share their reviews of wheel accessibility in hotels, restaurants, planes, trains, and automobiles. Schiebergen and Rhodes are born storytellers who are bound to make readers smile with every new post. Calling attention to accessibility is no easy job, but these two writers share their experiences magnificently providing us with a heart warming look into a world that many of us fail to recognize every day. In this Nectar News interview Young Advisor Madeline Rhodes tells Nectar News about their upcoming project and collaboration for a benefit concert with the Florence Belsky Charitable Foundation.

NN: Tell me about Globe Rollers, how it came to be, what the organization is, and how you became involved.

MR: I met my good friend Roxy at NYU. On my first day of school she saw my roller blades and I saw her wheels as well, she uses a wheel chair. Right then and there I said “well, we need to be best friends”. We did one trip together when we were 19, but other than that we were just friends at school. In the summer of 2015, I attended a seven week summer acting program in Amsterdam called International Theater Wing. Roxy is actually from Amsterdam and she was going to be in Amsterdam for the entire summer. One thing led to another and we decided to travel for five weeks together before my program began and then explore Amsterdam throughout the rest of the summer. We planned to visit as many countries as possible and I obviously brought my roller blades. 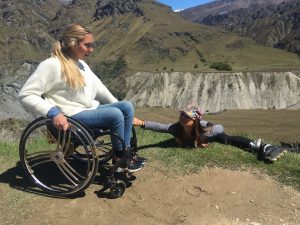 On our way to the first stop of the trip, Instabul, there was no on flight wheel-chair. I had to carry Roxy to the bathroom stall and we thought it was funny to make it very dramatic. There were strong men on board who could have helped but we thought, “no we’re going to make this uncomfortable for everyone so that we all can think about the fact that this flight doesn’t have a wheel chair on board”. When we got to the hotel (which claimed to be wheelchair accessible), there was a little hospital wheel chair in the lobby. We thought this was funny so I sat in the wheelchair and we played bumper cars. Then, when we got up to our room there was a foot and 1/2 tall step in front of the bathroom which was obviously an indicator of being an inaccessible hotel. When we called downstairs, they said, “well all the rooms have that.” We ended up making the most of it but questioned why they would label this as accessible. Istanbul is full of hills and cracks in the sidewalk and we were both falling left and right. When we sat down to eat, exhausted after the first day’s adventures we said, “we need to tell people about what’s happening”. The next question was, ‘how do we do that?”, and Roxy said “we need to blog. We need to start a blog right now.’

We wrote our first blog that evening and the wheel community responded very whel. We continued to travel all over eastern Europe. We traveled to Slovakia and then a week in Bulgaria. At every Airbnb it was the same thing – listed as accessible but definitely inaccessible. We began communicating with New York Disability Rights (NYDR) and they wrote to Airbnb on our behalf. Our conversation about accessibility began there and our travel incident encouraged NYDR to ask follow up questions on various disability issues.

NN: Why is making The Actor’s Temple accessible a passion project for Globe Rollers and what is your involvement with the benefit “A Wing & A Prayer”.

MR: When Dan told me that he wanted to make the Temple accessible I said “you need Roxy to come and tell you what that is like”. I knew we needed to get people with disabilities and others who use wheelchairs to come and tell us what accessibility at the Actor’s Temple means to them. Accessible means something totally different to one person than it does to another. Even wheelchairs alone are so diverse. There are motorized wheelchairs, manual wheel chairs, small and big, detachable parts, folding wheel chairs, there are just many variations let alone the people that use them. Roxy for example defines accessibility as things that “she can do independently”. Accessibility does NOT mean, “things she can do with the help of a security guard who pushes a button or a security guard who can lift her onto a ramp”. No, she feels she needs to show up and be able to do it on her own just like we do. 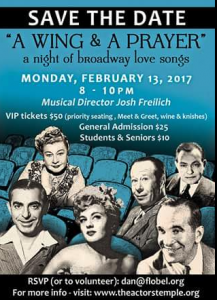 Dan Schneider has been a big supporter of Globe Rollers. At a recent meeting with the leaders of the temple we had a discussion about how to make the stairs outside accessible and how to get people with wheelchairs in. Someone suggested that we could have someone who was on call to operate the machine that would elevate people to the entrance and Roxy stopped them right there. she said, “no – that doesn’t sound accessible to me. What it should be is a code I can use to get in because I need to be able to use the machine on my own.” We were honored that Dan asked us to have a voice in the conversation so that the dialogue wouldn’t just consist of people that walk.

NN: Why is it important for this particular building – The Actors’ Temple – to be wheelchair accessible and accessible to all?

MR:That’s a really good question. In my opinion, I have seen a lot excuses. The prewar excuse: “Midtown has a lot of prewar buildings. Oh this building is pre-war, this is just how it’s built.” If the Actors’ Temple is making this big of an effort, I think it can be an inspiration to a lot of the buildings around. 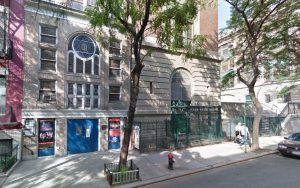 We are not talking about tearing down old buildings to make them shiny and pretty, we are talking about making an effort and showing that we as a community care. People end up in wheelchairs, it’s a very common thing that happens when we get older. You never know. Just be inclusive – that’s the point and be inspiring. This is a movement that should be happening and the fact that The Actors’ Temple is ahead of it and is noticing that this is important for them to do tells us a lot about what kind of people run the Temple and how special it is. 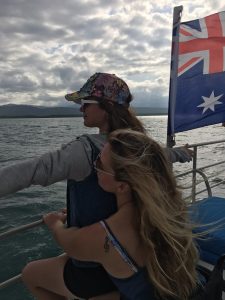 MR: One more thing about Globe Rollers. Our ideal world would be just a place that is wheel friendly. Instead of being a world in which getting around with wheels is “those peoples’ problems”; instead of saying that, why don’t we just look at the world and say “walking is an option, but so is rolling – and rolling is more fun!” We hope to normalize wheels and stop stigmatizing people that use wheelchairs as if it’s any different from anything else that we need. We need ramps, we need elevators, we need accessibility, we need inclusion. That’s it.

Actors Temple Theatre is in the historic Actors Temple Synagogue building located in the heart of New York’s Times Square Theatre District.  The “A Wing & A Prayer” benefit is a FLOBEL sponsored kickoff event /variety show on February 13th that will raise funds to save the Actors Temple. To purchase tickets visit ActorsTemple.flobel.org. To follow Madeline and Roxy in their GlobeRoller Adventures subscribe to their travel blog below.

“There was nowhere to go but everywhere, so just keep on rolling under the stars” – Jack Kerouac