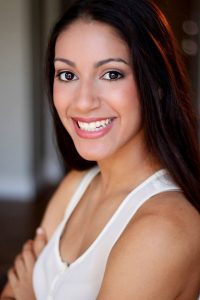 Carlotta Summers is a graduate of New York University’s Tisch School of the Arts with a degree in Theater and minor in Psychology. A student of the Experimental Theater Wing, Summers spent four years with the program honing her skills as an actor and writer. Carlotta, a Blue Fever Ambassador, is currently a member of New York Women in Film and Television and her work, The Illustrious Beauty, was featured in the ETW Second Year Showcase at NYU in 2014. After graduation she continued acting and writing, collaborating on the screenplay for Transients with fellow writer Dante Aubain and serving as President and CEO of her own film production company, Wild Cat Film.

In this Nectar News interview, Carlotta tells us about her journey with Butterflies, a concept that originally begin as a short writing assignment at NYU and has developed into production to promote a feature film.

CS: As a student of NYU’s Experimental Theater Wing we learned how to create our own work and how to craft our own characters in addition to acting, voice and movement. After I graduated from the program, I went to Stone Street Studios and I learned more about the film world. I also learned how to write effective characters for films, how to portray those characters as an actor for film and how to basically produce my own work for that visual medium. I’ve been writing since I was a child and I kept active diaries all through my elementary, middle school and high school life. I remember when I was a kid I used to write and draw everywhere journals, walls, boxes, you name it, I have always been an artist! So I had a lot of resources pull from to craft this complex story about a girl who suffers from the impact of verbal abuse in Butterflies. I consider myself a writer, an actor, activist, and a filmmaker.

NJ: Considering the tone of the past election and the intensity of the campaign your work also has an activist mission where it addresses a certain social issue. Tell us about the issue you are addressing with this project and why you feel it is a worthy cause.

CS: The film is about fighting back against those injustices and rising to a higher level than those who are bullying you. It is also about understanding that those who bully don’t necessarily have a problem with you. They might have been raised differently or have certain beliefs. No one is better than another person. They might be saying all of these hurtful things, these derogatory claims about your culture or the way you look, or your skin tone but it is not necessarily about you. Coming to that realization really helped me overcome a lot of issues I had with myself after being bullied. Reminding myself that I am in control of how I see myself, allowed me to take some of the weight I placed on myself for not feeling like I was pretty enough, or good enough, or worth it. These are lessons I want to show other young women, to help them through their experiences with bullies and give them confidence. That is what I’m really trying to convey with Butterflies. 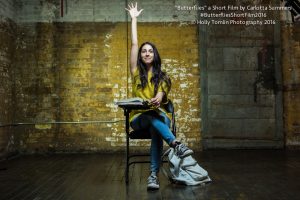 Holly Tomlin Photography “A still shot from the trailer, coming soon.” This Photo is by A.J. Wilhelm – http://www.ajwilhelm.com/

NJ: Tell me a little bit about the writing process. You said the film is inspired by real events but how did you go about crafting the story? Were there any challenges that you had to overcome in order to produce the piece that you are getting ready to showcase?

CS: I actually started this piece three and 1⁄2 years ago. It started off as a little seedling at Stonestreet Studios. I wrote about three pages and the title of it was also called Butterflies. It was just about a teenager who was being bullied and she visits her therapist to talk it through, exploring her mentality along the way. That scene is no longer a part of the short or the feature film, but it got me thinking about passionately pursuing this topic. I began writing every day after work and I started crafting the feature film version of the concept. I did that for about two years and then condensed the feature into a short so that I would be able to raise awareness for the feature film. The challenges weren’t necessarily in writing the film. It was actually difficult after I had already written the feature, to figure out what content to pull in order to sell the concept. I wanted to present it in a way that wouldn’t give anything away from the feature while still telling an effective and provocative story. I wanted to make sure I presented a story that would create the demand and the interest for a feature. Along with the Butterflies Film, I’ve initiated a movement called #RaiseYourHand, which seeks to inspire young children who are being bullied in schools to overcome negative influences and continue to raise their hands in order to seek knowledge. I think that now more then ever, this movement is prevalent.

NJ: What is the call to action for #RaiseYourHand

CS: #RaiseYourHand is a movement showing the importance of children raising their hand in class, despite the negative influences surrounding them. While people sometimes downplay verbal abuse because it is not direct physical violence, it can greatly damage a child psychologically, which in turn affects their whole well-being. They often become pathologically shy and deeply introverted, hesitant to participate in activities in school and elsewhere. It’s more hurtful when the abuse comes from peers, but is especially damaging when it comes from peers of the same gender. If anybody wants to participate in the movement they can send a picture of themselves raising their hand to butterfliesfeaturefilm@gmail.com.

Butterflies the short film seeks to explore avenues of change and what girls can do to overcome obstacles of oppression within the confines of a toxic environment. It examines possible causes of such aggression and explores a realistic depiction of how bullying affects everyone involved. The film challenges viewers to think about what we can do as a society to solve the problem. It also gives the victims an idea of how to cope and move forward in a positive light. “It is a piece for the victims and the parents of victims, as well as anyone who has ever been bullied in their lives”. To follow Carlotta Summers and the development of Butterflies visit the film’s website below.