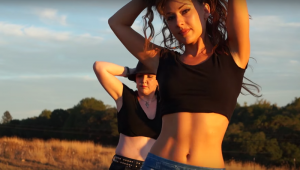 Nathalie Tedrick, international belly dancer and actress grew up acting in the theatre. She began training in Ballet, Jazz, Tap, Hip Hop, and Belly Dance soon after and furthered her acting training in Los Angeles studios with Deborah Aquila, Cliff Osmond, Brian Reise, and Warner Laughlin.
Nathalie teaches and performs regularly in the San Francisco Bay Area, and is privileged to share her art with the world. In this interview Nathalie connected with Nectar News reporter Nicole Johnson to share the news of her upcoming work with the Evolution Theater Company and her passion for a the art of belly dancing.

NJ: Tell us about your journey with belly dancing. When were you introduced to the art form?

NT: I grew up studying jazz, tap, hip-hop, ballet and when I was sixteen I took some private lessons with a friend of mine in belly dancing. When I was eighteen I saw the Belly Dance Superstars produced by Miles Copeland performed at the Marin Civic Center in the San Fransisco Bay area and they blew me away with their choreography, costuming, grace and power. That performance inspired me to train throughout the next year in belly dance in hopes of auditioning for the company when they came through town again the following year. In preparation I trained rigorously taking classes with Anne Zimienski, Terry Delgiorno, Dhyanis Carniglia. When they came back to town I auditioned and about a week after I received a call from Miles Copeland  inviting me to train with the company for three months in Monaco (Monte Carlo). From then on I was a part of the company and I toured with them throughout the United States, Canada, Europe, Africa, Asia and the Middle East for the next seven years. We toured 4-6 months each year and it was challenging, but absolutely amazing. The company came to a hault when I was 26, about three years ago. Since then I’ve been developing myself as a solo belly dancing performer. I perform at weddings, corporate events, parties and festivals. I toured with Thievery Corporation last summer and I’ve also been developing myself as an actress.

NJ: You are currently working on a full length show in Toronto and you are featured as a belly dancer. Tell us about your experience with the company and its interdisciplinary performance art.

NT:  Yes, I recently was hired by Evolution Dance Theater in Toronto to play a lead role in a production called Follow Your Heart which incorporates both belly dance and other styles of dance like jazz, samba, hip-hop, African along with acting. I’m memorizing lines and working on scenes with my acting coach and other actors half of the time and in other studio sessions I’m working on all the other choreography. In total I’m learning eight group pieces, which is quite a lot. I have a history with jazz, but the caliber of dancing in this cast is very high. The bellydancing comes easier to me in comparison to the other styles like jazz and African.So it’s  a challenge to match the other dancers in a style that is not my strong suit but it’s a challenge that I’m really excited to meet.

NJ: Is this your first experience bringing both acting and belly dancing together? 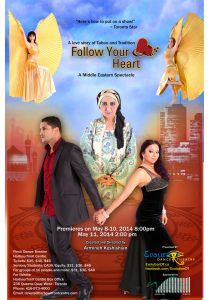 NT: I’ve always studied dance and acting separately. There were a couple of commercial jobs where I was cast as a belly dancer, for example I was a belly dancer in a heating and air conditioning commercial and I was also in an AT&T commercial, but I don’t typically get the opportunity to combine the two disciplines. Working with Evolution Dance Theater is such a unique experience. Our acting scenes gracefully transition into dance ensemble pieces and the director has been emphasizing that the dancers must embody the emotion of the scenes. It’s wonderful to bring the two disciplines together for storytelling. I’ve always wanted to be an actress and I always wanted  to be a touring dancer, so I’ve been making both dreams come true which has been awesome.

NJ: Why do you specialize and seek to market yourself as a belly dancer first?

NT: My passion for bellydancing comes from the deep sensuality that I get in touch with when I’m dancing. There is grace in the upper body that has a really nice juxtaposition with the powerful hip work that we do. The skill just represents all sides of a woman. The softness and the strength. There are not many other styles that bring that out in me and I’m very appreciative of the art form. Not only do men love to watch bellydancing, but I think women equally, if not more, appreciate this art form because it’s a really healthy way to express sensuality. Belly dancing is a beautiful refined art form that allows us to be sensual without being overtly sexual I feel like in our culture we are either overt sexually or we are completely  modest. It’s hard to be in between and it allows us to showcase our femininity in a very respectful way, but also truly expressing it. 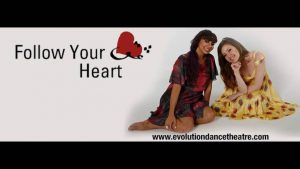 NJ: Could you tell us what bellydancing originally has been used for in the past.

NT: I have a lot more to learn on its history and origin but from what I’ve read and what I’ve been told, it has a debatable history. The most common theory is that originated in ancient Egypt and was performed for women during child birth to stimulate and activate the abdominal muscles. It was later turned into a community dance done by men, women and children. From there it evolved to become the prominent form of entertainment that it is today. I honestly believe that bellydancing has become even more beautiful over the years as it has been refined by even more modern art forms like jazz and ballet.

Nathalie toured internationally for seven years with Miles Copeland’s Bellydance Superstars and has performed and taught Belly Dance across the United States, Canada, Europe, Africa, Asia, and the Middle East. Her dancing has been featured on PBS, BBC, ABC, national and international commercials as well as various music videos. Nathalie was honored to perform Belly Dance with Thievery Corporation during their West Coast tour in 2015. Aside from her belly dancing work Nathalie seeks to become a TV & Film Actress. She is currently in the process of joining SAG-AFTRA and is excited to see what’s next in her performance career.