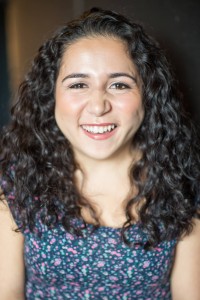 Nectar News sat down with New York based actress Sofiya Perez to learn more about her experience in her run of The Lilliput Troupe. The Lilliput Troupe tells the incredible true story of the Ovitz family, seven vaudeville-performing siblings with dwarfism who survived a year in Josef Mengele’s laboratory. Structured as a post-war vaudeville retelling of “Snow White,” the play follows the Lilliputs on their unlikely journey from their home in the mountains to vaudeville stages across Europe to the laboratory of the most notorious war criminal of the 20th century. Combining klezmer music, shadow puppetry, and the humor of vaudeville the play spotlights the power of family, the weight of survival, and the place of theatrics in a world of war. Sofiya took on the role of Perla Ovitz under the direction of Alex Benjamin, a director, writer and musician with a B.A. in Theatre from Northwestern University

NN: Tell us about the ensemble you worked with during your run of the Lilliput Troupe?
SP: The Lilliput Troupe script called for a very unique cast of 7 little people performers. I had the honor an privilege to share the stage with 6 other actors like me, who are trying to tell real stories about people with dwarfism and spread awareness. But more than that, most of our life goals were the same in that we all choose to shy away from the stereotypical roles such as elves or leprechauns. I was honored to share the stage with them all!
NN: Why is this piece of work important to you? You’ve done so much wonderful work, tell us how this piece in particular has affected you and your acting career?
SP: Wow! Well.. I’ll be honest, playing this role has been a dream come true! Perla Ovitz was a real woman, who survived many hardships in her life, but her story isn’t only hers… it’s her brother and sisters as well. The story of the Ovitz family is one that can teach us all about the power of family and forgiveness. From an actors point of view, this role is a dream come true because she (Perla) inspires me to be a better person and perform with the highest dignity for myself. The Ovitz’s were performers too… just like me, and they never let the world’s harsh judgments bring them down, rather they showed the world their skills by singing their hearts out on stage. They are a testament to what it is to be a true performer. The stage was their home.
NN: Can we expect to see a revival of this production in the future ?
SP: We hope so!!! There are no official plans at this moment, but the producers and playwright do want to continue with this show and make it bigger and better! *fingers crossed*
NN: What do you hope audience members left the theater with after watching the performance?
SP: All I hoped for was that audience members left the theater and wanted to learn more about the Ovitz family. I want them to go home and buy the book that was written on them or watch the documentary about their life… because their story is too good to be hidden away in the “annals of history!!”
Sofiya is a recent graduate of the Brooklyn College BFA Acting Program as well received a BA in Psychology. She is a recipient of Friars Foundation Award and Gi60 Collaboration Scholarship for her dedication and community support in the arts. Her performance credits include MISS JULIE (Miss Julie), SWIMMING IN THE SHALLOWS (Carla Carla), RIMERS OF ELDRITCH (Wilma Atkins), ANGELS IN AMERICA (Angel), DOG SEES GOD (Matt), and the Gi60 One Minute Play Festival. She has also starred in an original production as Perla Ovitz entitled ZWERGE (2014).
Follow Sofiya on social media by visiting her website and Facebook page.
Too Good