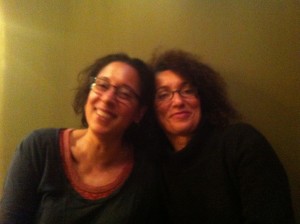 Filmmaking sister duo Angela and Gwen are based in different countries but share the same passion for contemporary issues that affect everyday lives and those of future generations. Angel is based in Dallas, Texas and Gwen in Madrid, Spain, with New York City as their hometown and hub. The two have been working together on projects to support filmmakers achieve their outreach and engagement goals since 2007 under the company name, MocaMedia.

Angela is an award-winning maker of short films who has worked in community relations and publicity. She served as the workshop director for CineWomen NY for two years and technical director of Democracy Now! for six years. Angela has an MFA from the University of Texas at Austin. She is a board member of the Video Association of Dallas, and a member of Women in Film Dallas and D-Word, an electronic community for documentary makers.

Gwen comes from a marketing and publishing background. She holds a Doctorate from the University of Madrid, an MA from New York University, and a BA from Vassar College. Gwen has lived in Spain for over 20 years. She speaks fluent Spanish and French. Before co-founding MocaMedia, she launched a video production and online marketing company based in Spain, MocaenbocaTV. Gwen teaches Digital Marketing and Social Media Management at Berklee College of Music on their Valencia campus, and is on the advisory board of Women Mentor Women. She served as Associate Producer on the ocean conservation film Mission of Mermaids. After a fantastic 2015 edition, she is again assuming the role of Director of Marketing & Communication for TEDxBerkleeValencia for the 2016 edition to take place on April 16. Her motto: “Be in the world.”