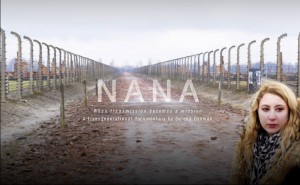 A TRANSGENERATIONAL DOCUMENTARY ON HOLOCAUST SURVIVOR AND ACTIVIST FOR TOLERANCE

Serena Dykman is an award­winning filmmaker based in New York, originally from Paris and Brussels. Her work ranges from comedy to drama and has screened at over 50 film festivals throughout the world including the Cannes Film Festival’s Emerging Filmmaker Showcase and the Chris Columbus Production Showcase. Serena is currently in post­ production for NANA, a feature­ length transgenerational documentary about her grandmother, Maryla Michalowski­Dyamant, an Auschwitz survivor.

NANA tells the story of three generations of women i​n three countries. Maryla Michalowski­Dyamant, a Polish Auschwitz survivor who spent her post­war life fighting intolerance, Alice her daughter and Serena her granddaughter, who retrace Maryla’s steps through Poland and Belgium to rediscover her remarkable story. The film aims to revive Maryla’s fight against anti­semitism and intolerance. Unlike most movies that revolve around the Holocaust, NANA is not a historical film, but rather, attempts to remind audiences what can happen in a world without tolerance.

“It is not about transmitting the message, but rather, we need to start the work again with each new generation, as they each live in a different social and political context“.

In addition to the personal journey that Serena and Alice go through during the making of the film, they question how Maryla’s memory and message of tolerance can be kept alive now that survivors are not here to tell their stories anymore. What concrete actions can be taken toward creating a world where humanity coexists in peace? How can people of different origins and backgrounds respect one another? NANA’s uniqueness lies in the fact that it is Serena’s personal quest for her grandmother, and therefore makes history relatable for millennials and post­millennials.

The teaser received the A​lan Landsburg Post­ Production Award and has gained support from leading industry professionals. The Kickstarter campaign for NANA was launched on November 1st, 2015 in an effort to raise post­ production funds. To learn more about NANA visit the links below.
TEASER