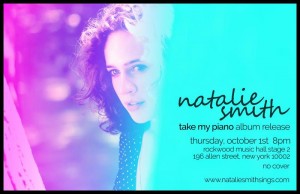 On October 1st, Natalie Smith released her debut album with a concert at Rockwood Music Hall. Joined by her band of celebrated musicians, Mat Fieldes on bass, Damien Bassman on drums, Eric B Davis on guitar, Eleanor Norton on cello, and Madeline Rhodes on vocals, Smith performed for a full house.

“Some of these songs have been with me for a long time, and it’s truly an honor to finally hear and see them recorded, in the hands of such wonderful musicians, engineers, and producers“. – Natalie Smith

The Humans Off Broadway