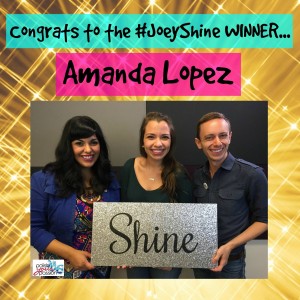 The Grand Prize winner of the Polish Your Passion and NYMF’s Joey Contreras in Concert inaugural #JoeyShine Video Contest is Amanda Lopez. This young star will perform her rendition of the competition song, “Waiting for More,” at NYMF’s Joey Contreras in Concert on July 16th at (8:00 PM) The Alice Griffin Jewel Box Theater at The Pershing Square Signature Center. Lopez joins a stellar list of special guest stars including Alex Newell from Glee and Broadway’s Ben Fankhauser and Adam Kaplan.

Amanda Lopez is originally from Miami, Florida and is a 2015 graduate of The Boston Conservatory. Some of her recent credits include Carrie: The Musical (Speakeasy Stage Company); The Museum of Useless Desire, Disney’s On the Record! (The Boston Conservatory). NYMF’s Joey Contreras in Concert will mark her NYC & NYMF debut.

The Top 20 Finalists all received singing and acting coaching thru song video feedback from Polish Your Passion Co-Founders Caroline Selia and Tom Morin. The Founders also prepared them to look their best for the judges’ panel and the winners were invited to come to the National Opera Center in NYC to record their final draft videos with Franchesco German and Joseph Patrick Conroy of Amerikana Media.

The New York Musical Theatre Festival nurtures the creation, production, and public presentation of stylistically, thematically and culturally diverse new musicals to ensure the future vitality of musical theatre. Now in its twelfth year, the Festival is the premier musical theatre event in the world. The preeminent site for launching new musicals and discovering new talent, the Festival provides an affordable platform for artists to mount professional productions that reach their peers, industry leaders and musical theatre fans. More than 90 Festival shows have gone on to productions on and Off-Broadway, in regional theaters in all 50 states and in more than 20 countries worldwide. Festival alumni have received a wide array of awards including the Tony Award® and the Pulitzer Prize. In 2013, NYMF received a special Drama Desk Award in recognition of its work “creating and nurturing new musical theatre, ensuring the future of this essential art form”. NYMF is the flagship program of National Music Theater Network, Inc., a 501(c) (3) not-for-profit organization. NYMF 2015 is sponsored by Fuzzrocket, PRG, TheaterMania, Clear Channel Spectacolor, and The Village Voice. The Festival is also supported, in part, by public funds from the New York City Department of Cultural Affairs and the New York State Council on the Arts, a state agency.

The NYMF PASS is a great way to experience The New York Musical Theatre Festival. With a NYMF PASS you can enter the theater before individual ticket holders. Passes also offer the exclusive ability to book tickets before they go on sale to the public. NYMF Passholder ticket booking begins June 1. Individual tickets go on sale June 15.