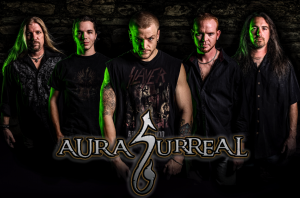 Aura Surreal began in 2007 with a group of five Southern Utah musicians who teamed up to compose and play original songs. The  collective of artists combined metal, punk, old and new rock releasing their first album, Sanity Awakes, in 2010. Shortly after releasing their second album Bury The No One in late 2011, the collective took a break from composing. Aura Surreal reemerged on the scene in early 2014 with new comers Steve McLaughlin on vocals and Nickolas Gough on bass. Both McLaughlin and Gough bring a new flavor and high energy to live performance that has reignited the drive and fire behind Aura Surreal’s music. Original drummer Dave Durfee continues to add creativity to the spectrum of the band’s sound and original rhythm/lead guitarist, Justin Vogel, has taken the spotlight with his backbone breaking riffs, experience and leadership on stage and in the studio. The band is currently writing their next album and released their first song with their new live line-up: Sticks and Stones. Learn more about Aura Surreal by visiting their website.