Erick Macek sees his music as an unending expression of daily life. “I create. I love. I fail. I do it again. I live. I learn. I love harder”. This message rings clear in the first single, “No Worries”, from his new self-titled EP. Mikal Blue, who holds a Grammy for his work with Jason Mraz, produced, mixed and engineered the project and The EP was fully crowd-sourced and is filled with guest appearances

Erick, and co-writer/vocalist Kate Earl, were accompanied by bass player Dean Dinning, from Toad the Wet Sprocket on their duet, “You Say”. They produced two versions of the song, one of which Earl will also release later this year.

“I joke about being an international hugger and high fiver. These gestures, along with my music, only scratch the surface of how important the word love is in my life, and how much I want to express it moving forward.” – Erick Macek

Over the past year, songs from Macek’s prior album, Colors May Change, have received a tremendous amount of music placement. CBS used his work in the series, Life Unexpected, Melrose Place and 90210. The feature film, The Opposite Sex, which stars Mena Suvari and Geoff Stults, used “Long, Long, Time” for the closing credits. 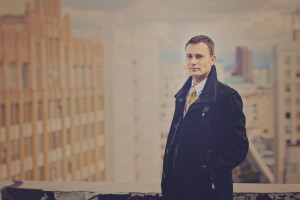