Home › Too Good › Roads To Olympia 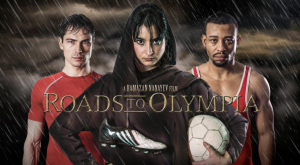 Ramazan Nanayev, writer and director of Roads To Olympia, was born in North Caucasus, Russia. Nanayev was raised by a Muslim family and competed in a myriad of sports including wrestling and decathlon at the college level with the hopes that one day he would participate in the Olympic Games.

As a competitive athlete he witnessed more than just the façade of victory and loss. Not only did he witness the extreme physical pain his teammates endured, but he also learned of their personal nightmares. Unfortunately, the grueling troubles that these athletes endured during their training is universal.

“I wrote Roads To Olympia in order to share stories very close to my heart, stories inspired by my experiences as a competitor and human“. – Ramazan Nanayev

Roads To Olympia questions the global status quo and explores social issues including oppression, gay rights, women rights and poverty. Weaving between Russia, Saudi Arabia and South America, it is a dark yet truly empowering story that follows young people testing their strength and endurance while they attempt to achieve their dreams.

To bring ROADS TO OLYMPIA to life, Nanayev teamed up with passionate and likeminded filmmakers who are eager to make the film no matter the circumstances. Ramazan Nanayev, Fernando Gamarra, Guto Bittencort, Mari Paradiso, Rula Nasser and Julia Kim are working together to deliver the highest production value and expose the harsh realities of this world through the compelling stories of Roads To Olympia.

The team recently reached their $45,000 goal via crowd funding on Seed & Spark and will begin production this summer.