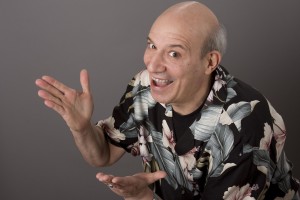 My First Rookie Season of stand-up comedy was in 1978 at Boston’s Comedy Connection at the Charles Playhouse. I was adequate, and got accepted into that fraternity of comedians, but didn’t really have the “passion” and didn’t pursue stand-up much further.

I moved to New York in 1983 and soon thereafter got involved in an improv comedy where I played a citizen of India, Malphal Singh. Malphal was a HIT character. Everything he said got laughs. Around 1985, I decided to have Malphal perform stand-up comedy and I auditioned for Silver Friedman at The Original Improvisation.  I made the cut and commenced my Second Rookie Season of comedy. I was adequate, but still lacked the passion necessary to pursue it further. I then went a quarter century without performing stand-up.

At the start of the year, I had a chance encounter with comedian Francesca Day. She produced her own weekly comedy show in New York, The Dirty Hoe Show. I saw her show four weeks in a row. It ignited my passion! It made me want to be a Dirty Hoe. So in 2015, I began my Third Rookie Season as a stand-up comedian. My NEW character is Glenn Cohen, a bald 58 year old unemployed Jew. In the last couple of years, a multitude of people have been telling me that I am very funny! Now, I agree. I’ve had 100% positive feedback. I am proud of my set and willing to do it anytime, anywhere, even to an audience of one. I am loaded for bear!!!! It only took me 37 years of writing jokes onto little slips of paper to assemble a six minute set, and IT’S HILARIOUS!!!!

This week I got the word I’ve been waiting for. Francesca Day sent me a text that she was putting me into one of her shows in May. I made it! I’m gonna be, no, I am a Dirty Hoe!  This is the goal I had set for myself, to get accepted into the Dirty Hoe Show. It’s in the same place, but with a new name (subject to change), “Free Dirty Friday” (Every Friday at Karma Lounge, 51 First Avenue, NYC at 7 pm).

Last Friday night I went to Francesca’s “Free Dirty Friday Show“. I then got to hang out with her and a few comics afterwards. Francesca had another performance scheduled at a different comedy club. I was just going to be in the audience, but I signed up as a “no show replacement” and I made it onto the bill. I had no idea I was going to do a show. It was my goal to be in the same show as Francesca and now I don’t even have to wait until May. After the show I got to hang out with a few of the comics until the extreme wee hours. I feel as though after three rookie seasons, I have graduated into being accepted by the comedy community I’ve been wanting to join. It was a GREAT NIGHT! Looking forward to a great year!!!

To learn more about Glenn Cohen visit his website and social media pages.