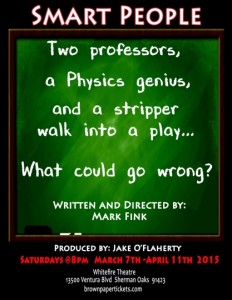 Smart People. Elizabeth Barry is on the fast track to the top rung of academia and nothing is going to stop her. Her son, Albert, whose life she has engineered from birth, has just won a major physics award and could be the next Carl Sagan. Then Albert goes to a conference in Las Vegas and meets a girl who isn’t the kind you bring home to mother. All hell breaks loose, raising questions of responsibility, morality and the choices we make, proving that life is never predictable, but always funny.
Date(s): Saturday nights – March 7th-April 11th
Time: 8:00 PM
Location: Whitefire Theater 13500 Ventura Blvd. in Sherman Oaks
Purchase Tickets
Whitefire Theater
Too Good