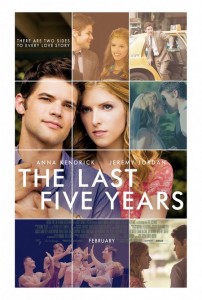 On February 13th, The Last Five Years premiered in Los Angeles and New York theaters entertaining movie goers with a big screen spin on Jason Robert Brown’s original Off-Broadway musical production. The musical was adapted for the screen and directed by Richard LaGravenese, a writer and director who is best known for writing The Fisher King. Sabine Hoffman, a New York based editor, has spent most of her 20 years in the movie business editing fiction dramas. The Last Five Years was a new undertaking for the editor being that the majority of the film is song, rather than dialogue. Hoffman’s credits include, The Ballad of Jack & Rose (2005), The Private Lives of Pippa Lee (2009) and Saving Face (2004). Recommended by a producer of the project, Hoffman attended her initial meeting for The Last Five Years with LaGravenese and completely fell in love with his vision.

“We just had a screening in NY, one of the coldest days of the winter and it was a sold out house. There were people in the audience that had come back to see it a second time. That was really rewarding. Sometimes you do films and you don’t really know how people will respond. To see the film with such an audience was a wonderful experience”. – Sabine Hoffman

On opening weekend, The Last Five Years grossed $42,000 and is currently one of the top 100 iTunes movie downloads. Starring Anna Kendrick and Jeremy Jordan.