Terri-Ann Nicholls, owner/maker/founder of Legato Gelato, has had a long-running love affair with frozen desserts. As a child growing up in Jamaica, Terri-Ann cherished her family visits to Kingston’s local ice creamery, Devon House. When her family moved to New York City later on in her childhood, she quickly found a new go-to spot to get her frozen fix in the city’s chain, Carvel. Her love for frozen treats just never stopped.

During a post-graduation trip to Spain, Terri-Ann had her first bite of gelato. She was blown away by the gelato’s intense flavor that most other frozen treats had failed to deliver. It was love at first bite. She treated herself to gelato at least once a day for the remainder of her time there and returned to the state’s with a new passion – gelato.

Terri-Ann went on to have a career as a financial analyst and commercial real estate asset manager in NYC, where she met her husband. After tying the knot in 2010, the couple moved to Nashville, her husband’s hometown. The change of place and pace helped Terri-Ann realize it was time to pursue her true passion. She began handcrafting her own gelato, experimenting with recipes, and taking several culinary courses. Her pursuit of the perfect gelato recipe eventually landed her in Italy, where she was able to learn and study under some of the greatest gelato maestros in the world. 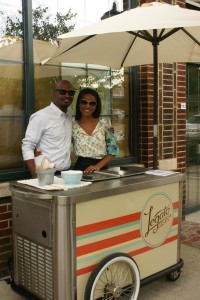 Terri-Ann quickly jumped at the opportunity to move her shop into a commercial space in Edgehill Village when one opened up next door to Taco Mamacita. As she developed her brand and product, Terri-Ann was most concerned with providing customers with the best possible products, accompanied by the best service she could offer. She heavily studied and sourced vendors for everything from hazelnuts to paper cups. She found places to get her fresh ingredients each day – such as the fruits used in the sorbets and the local milk that makes up each batch of gelato. For Legato, there are no shortcuts. Everything is made fresh daily with the best possible ingredients–without the help of any artificial sweeteners, dyes, or extracts. This is what she calls, “Legit gelato.”

Legato Gelato has a wide selection and they are always working on new flavors. Check out their website and follow them on social media.