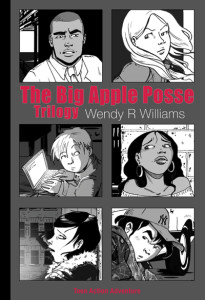 “The Big Apple Posse Trilogy” is a series of action adventure novels that follow a group of teens and their expanding band of travelers after they are threatened in a terrorist attack. The teens manage to escape the terror in the Big Apple and flee the enemy in a journey across country. The question is, can anyone truly disappear in a digital age?

The “Trilogy” is comprised of three books which are available for sale on Amazon.com. “The Big Apple Posse Trilogy” is illustrated by artist Sophie Escabasse.

Society and Culture Celebrities Out and About in New York City;

Miss Wendy’s Texas Love Advice Plus Some Occasional Comments on the Popular Culture.

Be sure to check out What’s Up Today? for last minute tips about what’s going on in New York and sign up to Follow New York Cool on Twitter. New York Cool launched in April 2004 and stories from the beginning of the magazine are still up in the Archive Section. New York Cool has the best Listing Section in town!