Saturday September 6, 2014: What a great first day Jen and I have had on lush and beautiful historical Illinois Route 66! We started out bright and early (7:00 am – challenging!) with the whole cadre of high tech motorcycles and tricycles, pulling trailers of all shapes and sizes. These folks are not to be messed with! They are serious professionals (when it comes to riding, that is) and many of them have already done this route 5+ times. Their commitment to the great Mother Road, as well as their profound love and respect for those who have suffered at the hand of cancer is really touching.

Rodger Fox is the man who is responsible for creating this amazing ride to find a cure for cancer. He started nine years ago out of his own personal challenges and triumphs with the disease. He and his wife are both survivors and speak with real passion about their commitment to help finding a cure. Over the years, he has continued to enroll others in raising money and also coming along for the ride for the sheer joy of the road – and the excitement of traveling the length of this great and historic highway.

We caravanned from our suburban hotel into the heart of downtown Chicago to the originating spot of Route 66 on the shores of Lake Michigan. This was no small feat, as we were only one of two cars (out of 65 motorcycles) and we were at the back of the pack. Last evening at the opening meeting, the organizer of logistics gave those in attendance a firm lecture about the rules of the road regarding traveling in a group on the freeways: always let cars pass through to change lanes, etc. These are conversations I’ve never been a part of before! However after being at the back of the pack and watching (rather surviving) the intense roller derby of five lanes of solid Chicago traffic – and attempting to stay behind the last rider in front of me – I began to have a deep appreciation of this concept. I could see cars weaving in and out of the pack and it gave me pause, as we were traveling at 65-70 mph! At times I was severely challenged to keep up in our trusty 2001 Toyota Echo (not your sexy image of a Route 66 babe magnet for sure!)

We made it into the heart of this beautiful city (bright early sunshine striking gorgeous soft pink tones on all the buildings that sparkled in the morning light) – and wended our way to the Navy Pier for the opening benediction, blessing on the bikes and the road, dedications to those who have passed and those who are suffering from cancer, and then joyfully a group photo with the skyline in the background. A glorious start to a fun-filled day. 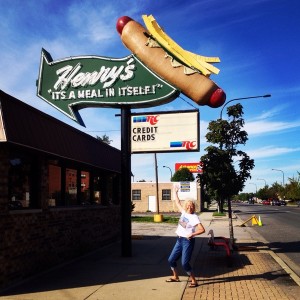 From there, we all headed out through the maze of traffic and down south into Cicero – the first exciting moment for me was approaching what is now famous to me – Henry’s Hot Dogs – a painting I did that is very close to my heart. It was closed (only 9:00 am after all) but I loved seeing it again in the sunlight – it was raining the day we were here before.

At this point, we decided we should just bag the group. After all, we have our own mission here – and it’s about being FREE (spirits? our own people? doing what we want just because we can?) We didn’t come here to be captives of a group! So we spent the rest of the day cruising the route at our own relaxing pace and that was just perfect. Once you make it through the maze of the southern tip of the city, you begin to see the start of what you always thought you were going to find on Route 66 – kitsch and camp! That started the minute we saw the giant rooster and pulled to a screeching halt! YAY! We’re on our way now! 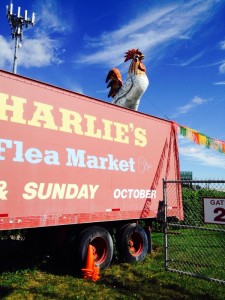 Joliet was our next stop – I’ve done this section of the route before and knew there is a really great museum there – AND they know how to lure Route 66 fans in with a great store chock full of cool Route 66 merchandise and books. I was thrilled to find Michael Wallis’ book on Route 66 ( a friend just turned me on to his Facebook page and now I’m his “friend” too). We also got a great spiral bound book that takes you through the ENTIRE Route 66 from start to finish telling you everything you’ve ever wanted to know! This will be extremely helpful. You could buy anything you want here with the Route 66 logo proudly displayed. I got lots of cool postcards too! 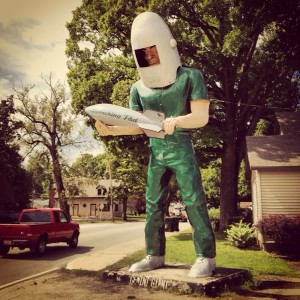 As we progressed southward we came to the ever-fascinating Gemini Giant at the former Launching Pad Drive-in in Wilmington, Illinois. This harkens back to the days when we were fascinated with space exploration – and of course fans of the gentle giant “muffler men” will recognize this wonderful adaptation, helmet and all.

For two gals who are used to a strong cup of coffee in the morning, we were seriously deprived at this point (nearing 11:00) of not only caffeine, but also food of any kind – and the kind woman at the Joliet Museum had recommended a spot called The Old Route 66 Family Restaurant in Dwight (teensie little town with a tiny restaurant with a HUGE sign that must have been at least three stories high! – obvious lack of sign regulations here!) She told us they had THE BEST cole slaw around and Jen loves cole slaw so this was a slam dunk! Not to mention we were starving at this point. The place was regaled in American flag imagery – painted all around the outside of the building and the decorations at our table were oozing with Stars and Stripes. There was no denying the fact that these folks are patriotic! 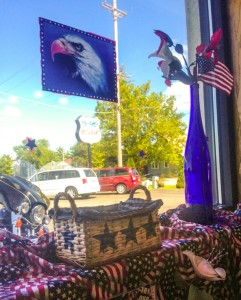 I’ve obsessed for months about the food on the trip – I actually tried to lose five pounds so I could be free to eat any road food I wanted to eat with impunity. I got about three off. But then again I was up five – sooooo! I’m still attempting at the outset of this journey to be prudent. And then again I had eaten almost nothing today, so the BBQ Chicken Lunch sounded really appealing and it came with your choice of potatoes (I thought mashed would certainly be better than fries!). Jen had a BLT – great choice! My lunch even came with dessert – strawberry rhubarb pie. I would rate that a 3 – but then again Ms Melinda Champagne (our baker extraordinaire at Blue Mountain Bistro-to-Go) makes the most divine pies I’ve ever tasted, so I’m heavily biased. I’m aware that that could be a real issue on this trip in general – I’m attempting an open mind!

We were wearing down in the afternoon after a fitful night of sleep – we were both tired. We rolled into the sleepy town of Atlanta where I knew a real gem awaited us – another gentle giant but this one packs a real punch! What could be better than a muffler man holding a giant hot dog? 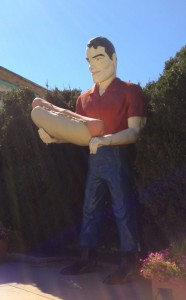 This was pretty much it for our day on the road. We checked in at our new hotel and met lots of the jovial bikers hanging around the parking lot with their rides and a few selling t-shirts in the lobby. The mayor of the town was so kind to host a special Italian dinner for the whole group – and it was darn good: baked ziti and some other chicken pasta with a carbonara sauce, garlic bread and sodas. I had to head out to find a bottle of wine for a nightcap. The first day of the ride would not have been complete without a toast to our accomplishment! So at the moment of this writing, the sun is setting and Jen and I are in our room on our computers listening to the bikers out in the parking lot playing some version of horseshoes, hanging in circles with their folding chairs – waves of laughter and shouting wafting up – as we type away – logging in our day while they party and laugh away the evening outside!

How to find a mentor (and maximize your relationship)

Eve of the Ride for the Relay