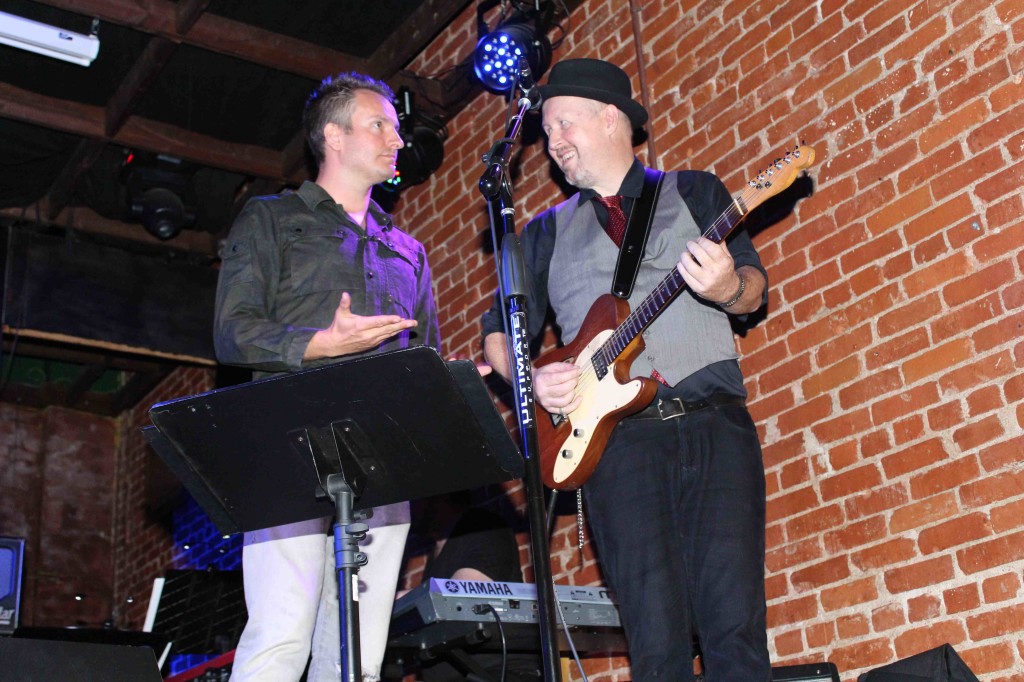 August 5th, 2014 – In the intimate setting of Molly Malone’s Irish Pub & Import Room in Los Angeles, CA, some of the most powerfully talented session musicians came together around Peter Gabriel’s music, in the latest of guitarist Angelo Bundini, AKA Scrote’s, “Interpreting” series. Each concert in this series benefits a charitable organization, and this one was no different, this time allying with PADRES Contra El Cáncer and the Florence Belsky Charitable Foundation. 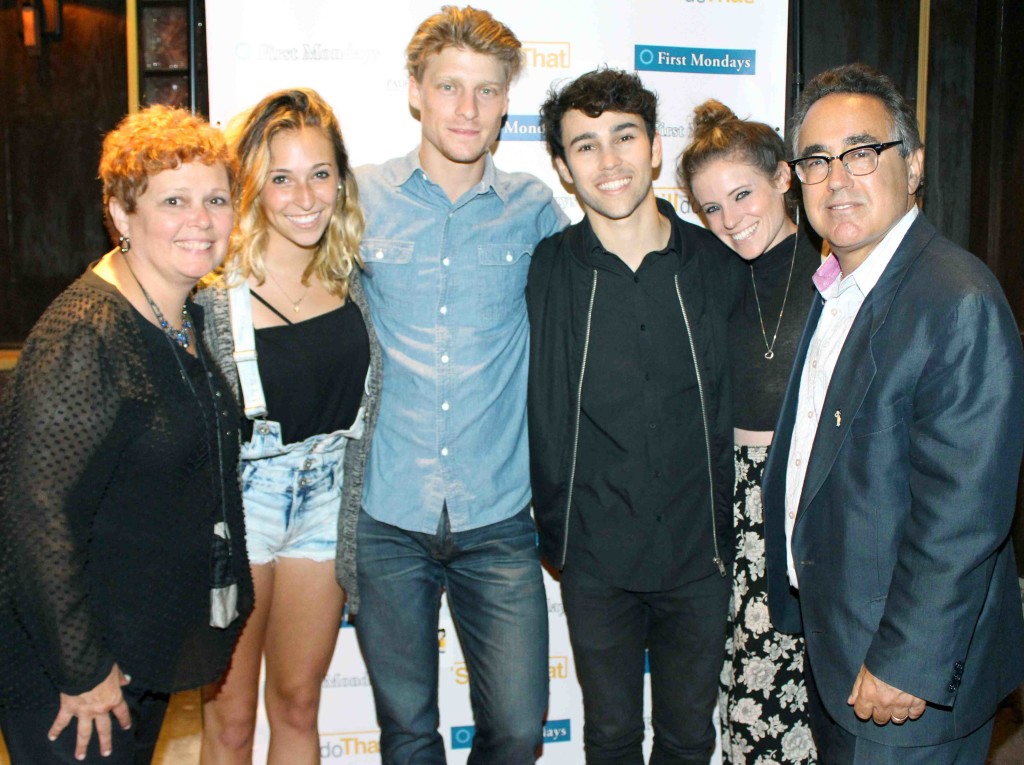 with a capacity of a few hundred, provided a rare opportunity to experience these performers in an intimate setting.

A fluid sense of collaboration and energy pervaded the room as the various musicians traded spots on stage. The exquisite-corpse band, with various musicians swapping their roles every few songs, kept the sound of the band fresh and energetic and allowed the broad cast to bring fresh musical elements in with every song.

It’s also worth noting that they only rehearsed for a day before the show, and this surely contributed to keeping them on their toes. In the tradition of Peter Gabriel’s eclecticism, the interpretations incorporated subtle shades of practically every compatible genre.

The show kicked off with a discordant, slightly cabaret-influenced version of “In the Humdrum” that broke into a lush brass instrumental section. “No Self-Control,” an early hit from 1980, got a stimulating boost from some flute-y keyboard tones and a space-age background soundscape, courtesy of keyboardist Jamie Muhoberac. 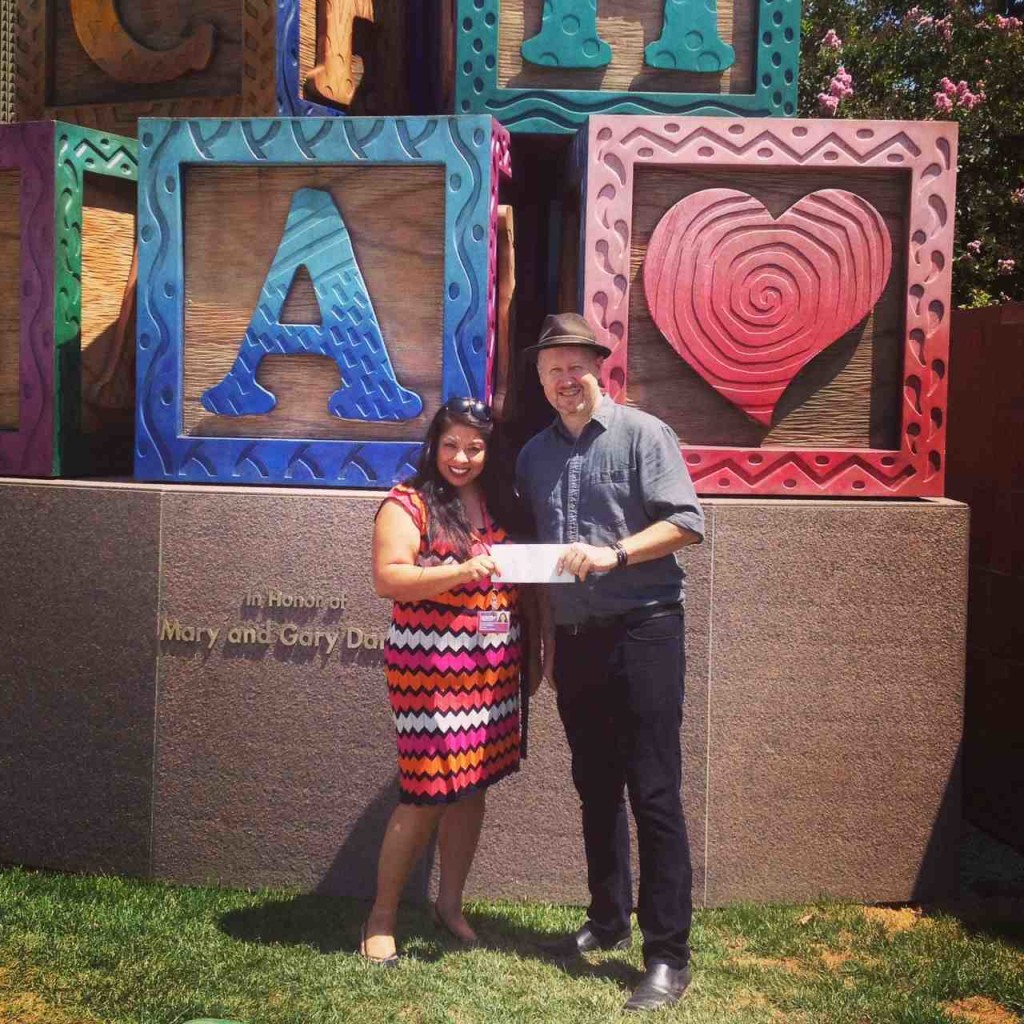 The band also capitalized on the song’s existing strong points by exaggerating the groovy rhythm of the guitar hook and converting the synthesized instruments that Gabriel so loves to their live equivalents.

Other songs benefited specifically from the synergy between the artists, some of whom have a backstory that precedes Angelo Bundini’s efforts. Holly Palmer, whose voice is a bit reminiscent of Debbie Harry, is an engaging performer in her own right. During “Games Without Frontiers” (interpreted as a duet) and “I Don’t Remember,” her sensuous dance moves seemed half mystic and half incitement. But when Scott Bennett and actor Gary Oldman – normally an imposing presence – joined Holly onstage and shook hands, telling the audience that they met at a local preschool, the vibe of the musicians changed markedly, making it into more of a “family affair” – albeit one with high-powered talents – than just a collection of hothouse flowers.

Later, Jonathan Clark, a member of Dwight Yoakam’s backing band, joined Palmer, Oldman and Scrote on “Mercy Street”. Clark’s rich, emotional voice offered a similar mood to Peter Gabriel’s original – perhaps conveying even more nuanced emotion. The harmonizing voices around him, though, blended in a way that served the song’s theme about the life and loneliness of the poet Anne Sexton. This convivial atmosphere also counteracted a typical criticism of Gabriel’s work, which is that it’s morose and a bit self-indulgent.

An energetic group of vocalists, two female (Jamila Ford and Jennifer Jo Oberle) and one male on lead (Dorian Holley), performed “Big Time.” Holley added a soul influence and a different, more direct kind of sass than the sarcasm with which Gabriel seems to have originally written the song. Though the ladies joined him for the gleeful refrain, his solo performances and classic rock ’n’ roll stage presence stole the scene.

While it was easy to get swept up in all the fun, the overarching message of the event remained clear. Before launching into “Don’t Give Up” with Joe Sumner (a song that Gabriel originally sang as a duet with Kate Bush), Holly Palmer took a moment to remind audience members about the show’s charitable relationship with PADRES. She dedicated the song to families dealing with childhood cancer and “anyone else who’s fighting impossible odds.”

PADRES CEO Elvia Barboa emphasized how grateful she was for the continued focus, and how impressed she was with all the performers’ engagement with the cause. “Afterwards I was able to talk to some of the musicians and they seemed to be informed, and they knew exactly why they were performing that night.” She also added that while many other charitable events require the beneficiaries to put in a lot of extra work, the “Interpreting Peter Gabriel” event demanded little, allowing her to sit back and enjoy.

“Two of my colleagues were huge Peter Gabriel fans, so they were excited about wanting to see this presentation,” she said.

Though Barboa is the right age to have grown up with Gabriel, she said she “grew up kind of listening to alternative music and so I don’t know him that well, but I know kind of his style.” Barboa arrived with several of her colleagues who helped her get the most out of the experience, making it not only a concrete source of help for her organization but a respite from her emotionally demanding work.

Scrote says part of the fun of bringing such renowned people together for benefit concerts is the freeing feeling of jamming with money taken out of the equation. These “musical and personal challenge[s]” are nonetheless brought to venues like Molly Malone’s where guests can have a “big concert, big stage experience as opposed to a bar band type of situation.” That way the greatest number of people can experience creativity as it happens – in a cozy space among friends, not under klieg lights.

Bundini says he likes to look for artists with a wide range of global influences so that songs have the best possible chance of being utterly transformed. Jeremy Koff of Koffeehouse Music noted after seeing the show that the artists, rather than just performing a tribute, infused each song with “their own personality – so you can see musicianship a little bit better.”

At the same time, the personable performers had a little help: some of the musicians, with their star-studded resumes, have performed with the very musicians they are interpreting. For example, “when we performed Interpreting David Bowie’s Berlin Years, I called my friend Greg Errico who played with David Bowie, Betty Davis, Weather Report, and was the original drummer/founding member of Sly & The Family Stone,” said Scrote.

The event was sponsored by the Florence Belsky Charitable Foundation, a New York based non-profit whose mission is “Connecting People, Sharing Ideas, Supporting the Arts.” Scrote first became acquainted with the Foundation through Executive Director Daniel Schneider. “Dan and I connected a couple years ago online because of my dog, Burt Reynolds,” he said. “They are neighbors. We became friends and slowly discovered our common musical ground.” Scrote’s propensity to sell out large venues and offer an exciting musical experience made his loose collective of musicians a perfect fit for the charitable organizations the Belsky Foundation wanted to assist.

The show attracted a wide-ranging crowd that even included Peter Gabriel’s and Sting’s sons – though they kept a low profile. To Dan Schneider and the Florence Belsky Foundation, the event was a huge success. “Not only were we able to further our mission by connecting artists and allowing them to share ideas with each other in an artistic and intimate setting, but we also raised over $2,000 for PADRES, a terrific and much needed organization. We hope to do future events with Scrote and raise more money for charitable causes,” Schneider says.

Possible future shows might include Interpreting Radiohead’s Kid A, Interpreting Miles Davis ’70-’75, Interpreting Tom Waits, and Interpreting New Wave ’77-’85. PADRES Contra El Cancer will be having a gala event and fundraiser in Las Vegas, Nevada on Friday, October 31 – Sunday, November 2, 2014. The weekend-long event, El Sueno de Esperanza or “The Dream of Hope” will feature Eva Longoria (“Desperate Housewives”) is as the spokesperson and Gala Chair.