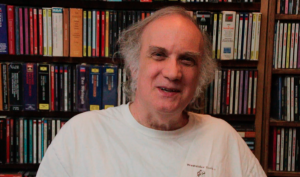 In a world where google has become a placeholder for memory and the knowledge of historical facts are seldom valued, Bruce Eder is a rare breed. A self-described “deep knowledge” lover, Bruce has the ability to answer some of the most seemingly obscure questions about music and film history in New York City. In fact, this is something he now does on the daily as manager of the upper west side staple “Westsider Records.”  Nectar News sat down with Bruce to discuss music history, how he landed this job after a career as a writer, and the importance of bookstores in society today.

NN: How did you end up with your job as manager of Westsider Records?

Bruce:  For 35 years I was a writer reporting for various newspapers and magazines. I got to write about politics, science, and history. I was also a producer on various video projects for the Criterion Collection and Sony music where I was doing CD reissues of Soundtracks.

I had known the store since the early 1970’s. Even though I grew up in Whitestone Queens I spent a couple of days each week in New York because I was taking a course in Astronomy at the Hayden Planetarium at the American Museum of Natural History.  So I knew the book store, which in those days was known as Barcou Books. Cut to the mid-1970s, and by that time I’m in College and I’m coming into the city more regularly. 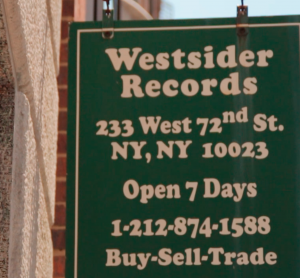 The whole time Westsider Records was in my orbit. It was a place I would go to frequently after work. I would turn up there the way Norm Peterson would turn up at Cheers! Eventually the ownership changed on the Book and Record store and at the same time the film company I was working with moved out of New York. The woman I was living with at the time was a tutor and she was always bringing graduate students into the apartment. So I needed a place to spend my days. I really ended up at the bookstore just to fill time. I certainly knew the routines of the shop and it was better than hiring someone cold. Eventually I ended up in charge of the record store because I certainly know music.  Especially music from before the 21st century.  I collected records for a long time. I can remember every piece of music I’ve ever heard going back to maybe the age of two. 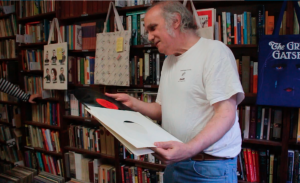 NN: Why do people come to Westsider Books and Records?

Bruce: People come in here to find out all kinds of things. I mean they come to buy the things we sell but other things as well. For example, I find people coming in here just to ask certain pieces of historical information about New York and music. I have found that I have become almost like – did you ever see the TV series police squad with Leslie Nielsen? Remember he would go to that tipster who was the shoeshine guy and ask him information like where can I find “so and so.”  There is one great bit in that show. After Frank Drebin leaves a priest sits down and slips the shoe shine guy $5 and says “what can you tell me about transubstantiation?” I thought that was great!  But you know,  people come in here just asking me all kinds of questions.  Stuff about the city – where to find certain things. I love that about this place. I love that it’s a part of what the store has become to a certain extent.

NN: Are stores like Westsider Records a Dying Breed? 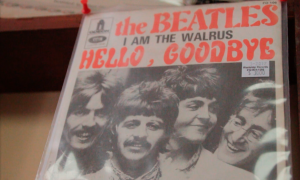 Bruce: Yes, very much so. Between New York real estate, rental prices, and the changing population things are different. There are fewer and fewer people who concern themselves with what you might call “deep” knowledge. And those fewer and fewer people tend to cluster at the research libraries. Which of course is where I used to spend a good deal of my days when I was doing the film commentaries. I used to joke about that at the Performing Arts Library  research division. I was there so much I expected to be interred there when I died. I find that because I tend to remember things that I’ve read – it’s very useful.  People come here because they want to know about something that happened in the city in 1965 and I can tell them.  What people want to know is not just about movies, literature , or music. Although it’s often related to that. You wouldn’t get the reference, but there is this old TV series Banacek. In it the lead actor always used to rely on this book store owner played by Murray Matheson named  “Felix Mulholland” who had this antiquarian bookstore in Boston.Whenever he needed information on the history of a particular family for a case he was working on, or say the case how to do with the design of a car, the history of that car company, he would always be calling Felix Mulholland. I feel like I am turning into Felix Mulholland in real life. 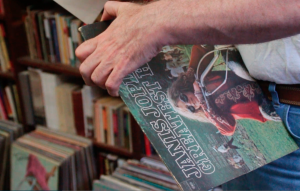 NN: What is one of the most interesting or craziest pieces of information someone has ever asked you?

Bruce:  Barring real insanity – and we’ve occasionally had that –  I mean last week we had a guy in here who was talking about how the Chinese have sent a communication satellite into space that is messing with all our brains. I had to ask him to leave. Someone wanted to know  where a venue such as the “Cafe Society” actually was in New York City in the 1940s. Things like that. It’s interesting because there are very few people walking around right now who would even know to ask that, even though quite a few notables played there.  Cafe Society was the kind of place where before there was a Rainbow Room that’s where you played to get exposure in New York among people who could do you some good.

NN: What is the most popular music sold here?

I can understand why in the 1950’s some people were outraged by the onslaught of Rock and Roll. But it wasn’t so much that Rock and Roll was out there, it was that it tended to completely overwhelm the airwaves. It supplanted everything else. Of course that just comes with the nature of the media business: the genre generating the most money will get the most airtime.

NN: Who are your customers? 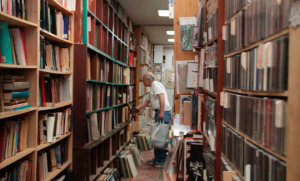 Most of our customers are comprised these days of a complete range of people. We have customers as young as ten years old and one or two that are in their 90’s and everything in between. 20 years ago most of our customers would have been over the age of 50. The median age of our clientele has dropped in the last decade from 60 to 30.  And I have to say, it’s not my concern, but most business organizations in the world would love to know how we pulled that off. We just did it by being who we are. It’s as simple as that.

NN: And who are you?

Bruce: I try to make this place a bubble of civility and quality. Whatever the music that we might be playing at any given moment, we want it to be a bubble within a much louder outside world. You could walk in here on any given day and depending on the time of day and what I am in the mood to play you could hear anything from a Schubert Symphony to a Beach Boys song. Just yesterday I was playing for somebody an Irish folk song being sung in Finnish.  I don’t limit myself to the United States. There’s a range of artists all over the world that you will hear over our speaker system at various times. in fact, one of my favorite groups – and I don’t speak a word of Czech –  is a Czech group called check Cechomor. They are a Czech Folk Rock group. They started in the 70s and they are still going. Their sound is absolutely glorious. 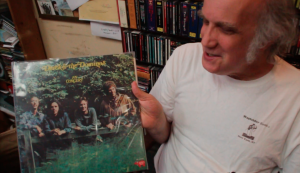 NN: Do you have a favorite record in the store?

Bruce: Oh there are so many. One that I love that we have right here is “Hounds of Love” by Kate Bush. I adore this record and I adore her. I’ve met her. She doesn’t concertize but she came to New York back in December of ’93 to do a signing at Tower Records on East 4th Street. The line ended up being 6 blocks long. She stayed for 7 hours and I got to meet her after about the 5th hour. She was absolutely delightful.

But it’s hard to say. There are so many. Right here – “Derek and the Dominoes,” this is Eric Clapton with probably the three finest musicians that he ever worked with and I love this album. You know outside of Japan this album has never really been reissued intact on CD. They tampered with it when they did the CD version for the United States. Unfortunately it also coincided with Clapton’s addiction to heroin, but at this point he was still playing magnificently.

NN: What advice would you offer to young people who are passionate about music and music history? 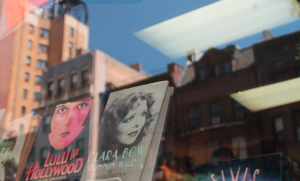 Bruce: Just get yourself out there. Be prepared to say yes to things. I hate to use him for advice, because apparently he’s not a verypleasant person in various aspects of his private life, but Woody Allen is correct about one thing that he has said: sometimes success is just a matter of showing up. I got my first gig doing audio commentaries basically because I was covering a press conference as a reporter and a question came up that I was able to answer that the person hosting the press conference was not able to answer. that led to a conversation with the person hosting the press conference, which led to a contract to do audio commentary on two movies for channel Thirteen. Those in turn became my demos for the Criterion Collection and led to 25 years of doing audio commentaries on movies. Be prepared to speak up and take advantage of opportunities that are in front of you. I didn’t sell my soul to the devil, I haven’t sacrificed anyone to the Corn God. So if this can happen to me, it can happen to anybody. 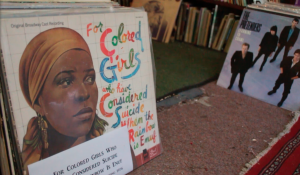 Lastly, don’t be afraid to acquire knowledge. You never know how some piece of information that you might gather in third grade, your second year of college, or your second job out of college might be applied five, ten, fifteen years later. You just can’t anticipate the questions and the challenges that are going to come up. Frankly, I don’t think anybody ever paid a price for being too well informed.

More information on the store can be found here: http://westsiderbooks.com/recordstore.html

The Underground Center: Building the Next Generation of Environmental Activists