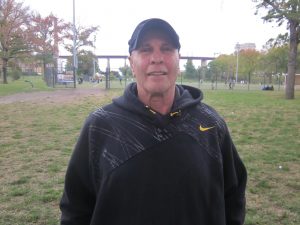 Martin Jacobson (aka “Coach Jake”) is the legendary NYC soccer coach who has led his team at Martin Luther King High School to win 16  championships in over 20 years, but his role as a coach extends way beyond the field. Coach Jake has developed an extraordinary reputation over his time as an educator working not only to ensure that his students and team get into colleges with a 95% acceptance rate, he has also become a serious advocate for the rights of all his students, especially immigrants. This passion has led him to create “The Coach Jake Foundation”, a non-profit charitable organization wherein soccer facilitates positive support to young athletes in cosmopolitan areas throughout the United States. Nectar News got the opportunity to interview coach Jake about his experience as an educator and youth advocate:

Nectar News: Can you tell me about your journey toward becoming Coach Jake and how you ended up at MLK?

Coach Jake: Sure. I was born in Brooklyn – raised here – and I came back to New York in 1986 . I was penniless and homeless, having struggled with addiction, and I came back from New Mexico and did anything I could to survive. Eventually I landed a job in the Department of Ed. working as a guidance counselor and was placed at MLK. So I ended up starting to coach there – by chance actually. You know back in the 80’s it was pretty tumultuous. MLK was called “horror high” at  the time and it was tough. It has mellowed itself out a lot since then and it’s  like a whole different place. I knew it was a great place to build a team and I got the opportunity in 1994 to take over this team that was ‘winless’.

Nectar News: Was it a surprise to you to begin coaching so successfully?

Coach Jake: I knew I had something very special in the building, but I also knew that there were many challenges that these kids faced. My kids were from all over: West Africans, Mexicans, Dominicans, a lot of boys from the islands. We had a large ESL population back in the 90’s. A quarter of the school’s population were from foreign countries. So I knew there was a lot of potential when I walked down the halls. You know that old quote “build it and they will come?”: it’s so true. Once you start coaching and you show that you care and you build that kind of trust, things develop from there. And that’s exactly what happened. We built it, they came, they developed, and we started working on the team real hard. And there were no fields. Back then Central Park was all dirt and garbage cans. We would hijack places to practice.

Nectar News: You began as a guidance counselor – did you find coaching to be very different or similar?

Coach Jake: I think they go hand in hand and many coaches are like counselors. I have degrees in physical education, health, psychology, and drug and alcohol counseling. The thing is though to be a coach you have to have empathy, not just be a counselor. It helps to have the skills and background as a counselor, but it’s not the whole thing.

Nectar News: What sort of challenges do you face as a coach and have they changed over the years or do they remain the same?

Coach Jake: The challenges not only remain the same, but in some aspects they get even more difficult. They are the same as back then in the sense that we still do not have a place to practice, we have to hijack fields, I still go through quite a few conflicts over all. In some aspects because of our success we have the backing of city counsel and I have used my political  relations for the betterment of our kids. But basically, the challenges have always been there.

Nectar News: How do you keep from getting burnt out?

Coach Jake: I just accept what is and I try to work around it. I do get stressed on those avenues of ‘where to go’ and ‘how to go’ but I get equally as stressed about these kids’ lives. That part has continued to be the same. They go through all of these personal struggles like I have -homelessness or poverty. Not all, but a good part of my team have personal struggles. But I have great kids that I work with and we make it work. Sometimes if we don’t have a field I go on my back terrace – we play on cement. Whatever it takes, we do.  It is a struggle.

What makes me keep ticking and going are the kids and what they are about. You know it’s been said “you save one life, you save the world.” So I try to go by that. I know I have been saving some lives here – 96 % of my kids graduate who are on my roster. I have had hundreds of kids go to college. I don’t ask anything from them other than they give back to others – and I have had 12 professionals play for me over the years. So those are statistics, but what keeps you going is the passion of the sport and the love of knowing that you are helping others. Especially since I was in hell for a while. In other words a good quote is “Am I helping them or are they helping me?” They are saving me and I am saving them.

Nectar News: As you have mentioned, you work with many children of immigrants on your soccer team. Since the election of our new President  and his cabinet’s aggressive policies toward mexican american immigrants and muslim americans have you observed any change in your students. How do you see them reacting and what advice do you offer them?

Coach Jake: I have helped many kids over the years with their immigration situations. I have a lawyer and have paid lots of money to help them. I was once bankrupt and I’m not a millionaire now but I have the money to help and that’s how I look at it. Even before this horrific administration – I was helping kids with their immigration status. What I am working on today, which has been in the works for a long time, is “The Coach Jake” foundation (http://www.thecoachjakefoundation.org/).

My main focus in life, even though I’m still coaching, is this foundation so that we can save more lives and counter anything that may be coming down the pipe line.  The main push will be to assist in immigration issues. And already I have quite a few undocumented kids.  What I do is just try to save one life at a time and whatever comes my way – I try to figure out what to do. There are so many kids of ethnic diversity who are going to experience hardships due to this administration and their rules. I deal also with a lot of muslim kids and they don’t always let on that they are upset, but we talk about it. How could you not be upset? I just have to go one day at a time, one kid at a time to change what I can. It’s all we can do.