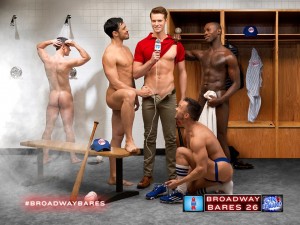 In 1992, Broadway Bares was established by the Director and Choreographer of Kinky Boots and this season’s hit On Your Feet, Jerry Mithcell. The summer performance is produced by and benefits Broadway Cares/Equity Fights AIDS. The first Broadway Bares edition featured seven dancers stripping on a bar and raised $8,000. To date, the 25 editions of Broadway Bares have raised more than $14.3 million for Broadway Cares/Equity Fights AIDS. FLOBEL Advisor and Creative Director of Grind Arts Company, Eamon Foley will be choreographing a number in Broadway Bares this season. Grind Arts Company is an emerging theater collective founded by Princeton alumni dedicated to contemporizing the way audiences interact with art. They specialize in reimagined revivals, immersive theater, and the convergence of theater and film. This week, Nectar News sat down with Eamon to discuss the establishment of Grind Arts and his participation in this year’s Broadway Bares benefit.

NN: What inspired the establishment of Grind Arts on the Princeton campus and tell us the responsibilities of your position as Creative Director.

Princeton had amazing talent due to a recent arts initiative, but nowhere for artists with professional aspirations to flex their muscles and dive into the craft with professional drive. The idea for Grind Arts came to be when my “too ambitious” production of Sweeney Todd was turned down. I had an amazing team behind me and I didn’t want to waste a second of my time at school not creating theater, so I founded the company. We mounted an immersive production of Sweeney on a loading dock on the outskirts of campus, which created a meat-processing plant aesthetic. The thrill went beyond bringing a sexy, contemporary edge to a piece that I loved. It was seeing all the faces new to the theatre scene down at our loading dock, carrying their own lawn chairs because we had run out of seats. We sold at 200% capacity, and most of our audience had never attended a musical at Princeton before. This confirmed our original theory: unique theatrical experiences that break convention get young people to take notice, and it’s our goal to help this new audience find their way into the theater by creating work that speaks to them.

NN: What was the biggest challenge you faced in developing the program on campus and where do you imagine Grind Arts will be in five years?

The challenges were the best part. Limited resources and a lack of theater space forced us to get creative with how we would to get to the core of a piece while encouraging us to work outside of the confines of the proscenium. It shaped our aesthetic, which I refer to as “theater against all odds.” To that end, in five years I see Grind Arts Company moving into a warehouse theater space of our own, which could be reconfigured to create any sort of production. We’ll have a cult hit that takes place somewhere like the Highline or a parking garage, as well as a Youtube channel that steadily releases concept films that merge the world of cinema and theater.

NN: Have you performed with Broadway Bares before?  Tell us about your journey to becoming a choreographer for the annual event.

I first heard about Broadway Bares when a poster showed up backstage at Gypsy, the first Broadway show in which I was cast which was choreographed by Bares founder and esteemed director/choreographer Jerry Mitchell. This was 12 years ago mind you and I was 10 years old, but it definitely sparked my curiosity. I wasn’t allowed to attend, but I was insanely jealous of the adults that got to be apart of it so you could say I’ve kept an eye on Bares since I was a child. Last summer I assisted Jerry for the 25th anniversary production and got to experience the giant undertaking that is a Bares Production: hundreds of performers and artists donating their time and talent, going about every detail as if this show would be running for years. It was inspiring to see what dedication surrounding an amazing cause could achieve. I learned the ropes and learned first hand how a Bares production gets made, which helped when it came time to pitch.

NN: How do opportunities like choreographing for Broadway Bares help you to further your craft and your involvement in the industry?

This is my New York debut as a choreographer post-college! I’m sure it’s a fantastic way to get your work seen by the industry, but I’m more excited about meeting other emerging choreographers and dancers. I’m in awe of everyone I get to work with. The artists in Bares will hopefully inspire future concept videos and other innovations with Grind Arts Company. Also, when working with a full production team, you start to understand how to best communicate your vision to other artists so that they have room to bring their own expertise and creativity to the table, leading to something that expands beyond even your own expectations.

NN: What has always impressed you about Broadway Bares and Broadway Cares/ Equity Fights Aids’ commitment to the cause?

The leaders of this organization have done an amazing job helping me understand that the core of this production is social change. Jerry and BC/EFA leaders each had friends that got sick who had no one to look after their dog, their medications, and eventually their estate after they passed. They watched a culture change from avid self-expression to fear and body shame. 26 years ago, Jerry Mitchell danced on the bar at Splash not only to raise money to help those in need but to usher in a new attitude of self-love and to reclaim sexuality. Today it is a massive concert that celebrates gay culture and gay bodies, but extends help to everyone across the nation affected by HIV/AIDS. I am honored to be even a small part of such a powerful movement.

On Sunday June 19th at 9:30 pm & Midnight, Broadway Bares will open at the Hammerstein Ballroom. Tickets are available at the link below. To learn more about Broadway Bares visit the organization’s website and social media pages.