Terry Nelson, founder of Hip Hop USA, established the organization in an effort to provide young emerging urban artists with a platform to express their natural abilities, build self-confidence and feature their work on an accepted medium for graffiti demonstration. With showrooms in New York and Shanghai, Hip Hop U.S.A. provides made to order apparel, shoes, custom skateboards, toys and novelty items to an international customer base. Nelson and his team also find time to invest back into the community by providing young people in New York with opportunities to design their own sneakers at Hip Hop U.S.A.’s monthly Sneaker Art Workshop. 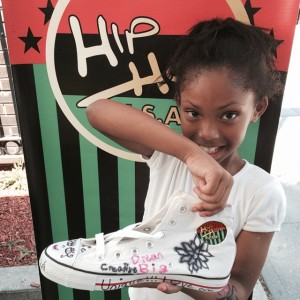 More than ten Hip Hop U.S.A. artists have been selected to have their work featured on famous sneaker brands distributed in Footlocker stores across the United States. The organization has allowed these emerging artists to jumpstart career pursuits in the related occupations of art direction, illustration, product marketing and design.

“Graffiti art has a rich history that emerged in New York City, along with Hip Hop Culture, during the economic downturn in the 1970s. In 1979, the music was popularized in the United States through the breakthrough single Rapper’s Delight. Today, Hip Hop music, culture and art is recognized around the world as as a new American artistic achievement“. -Terry Nelson