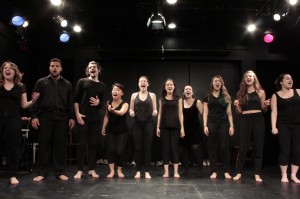 Unmasked Theatre Company was founded by Catherine Geller and John Bautista in March 2013. The two students met in an outreach program at New York University in 2012 and bonded over their common passion for service and theatre. Geller and Bautista noticed that there were several theatrical endeavors that highlighted social change, but there were very few examples of musical theatre that addressed the stigma surrounding mental illness.

After months of discussion and planning, Unmasked Theatre Company was born. UTC uses elements of musical theatre for social change and seeks to tackle pre-conceived notions surrounding mental illness via story telling and music. Currently the creative team is in production for their new full-length musical composed by Mark Evans. Learn more about Unmasked Theatre Company by visiting their website and social media pages.