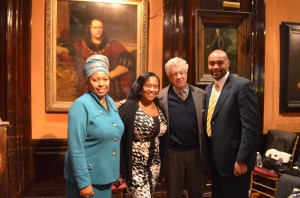 The Playbook for Law Enforcement and Citizen Relations

On February 3, 2015, The Florence Belsky Charitable Foundation hosted its first annual educational colloquium entitled, “Dialogue and Discussion: The Playbook for Law Enforcement and Citizen Relations”. The colloquium took place at the Players Club in Manhattan and was moderated by, adjunct professor and CEO of Matthews & Matthews, Arthur T. Matthews.

In the aftermath of a number of horrible events around the country that have made continued trust in law enforcement a major issue between citizens and police, a small group of former law enforcement leaders, citizen leaders and other interested stakeholders convened the colloquium in order to discuss and uncover the passion inherent to this issue. The panelists and audience discussed a citizen patrol strategy that has the interest of both the citizens and law enforcement in mind. 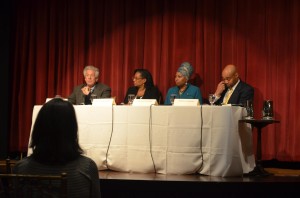 Arthur T. Matthews was joined by several of his colleagues and students in the audience. The other panelists were Charles W. Humphrey, Evelyne Matthews, Onida Coward-Mayers and Richard D. Emery, Esq.

Approximately forty guests attended the event, bringing a variety of backgrounds and perspectives to the conversation. During the two-hour discussion, all panelists were given the opportunity to speak on the issue from a personal perspective and then fielded questions from the audience and Mr. Matthews.

The evening concluded with a discussion of possible training methods that could lead to a thaw in law enforcement and citizen relations. Overall, the panelists agreed that compassion and understanding, on both sides of the fence, can ease hostility between law enforcement personnel and the citizens they protect. This conclusion is in sync with solutions offered by NYPD’s new Deputy Commissioner of Training, Michael Julian. Julian recently emphasized the importance of tamping down the “machismo” some officers display, and re-training them to create better dialogue with the communities they serve.

Dan Schneider, the Executive Director of the Florence Belsky Charitable Foundation, started the evening by introducing Foundation advisor, Arthur T. Matthews. Mr. Schneider and Mr. Matthews developed the idea for the colloquium after protests erupted in response to the Staten Island Grand Jury’s decision not to indict officers involved in the death of Eric Garner. At the conclusion of the discussion, Mr. Schneider thanked the audience and panel.

“We are thrilled by the turnout for this panel. We believe that each panelist brought a very unique perspective to this important and complex issue. We appreciate their willingness to speak frankly on a difficult topic and hope that our efforts this evening will help open a dialogue that will elicit ideas on positive solutions and change for the better”. – Dan Schneider

A video of the panel will soon be available for viewing on the Foundation website, and in The I Can Still Do That Legal Committee Facebook Group. The Foundation seeks to continue the conversation via social media.

Ron Yoshida’s Hello World Communications and Abby Sternberg of Media Masters donated film equipment and services for the recording of the colloquium. The Foundation hopes to sponsor more educational panels on a variety of topics in the future.