Home › Too Good › The Reluctant Psychic 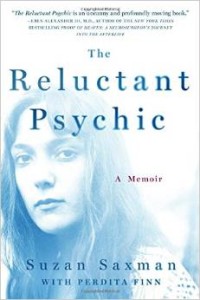 We all, as children, had our imaginary friends and monsters in the closet. But for Suzan Saxman, those friends and monsters didn’t go away—and they weren’t imaginary. From an early age, Suzan knew instinctively that she had to hide her true self. She couldn’t talk about the specters who haunted her, waking and dreaming. In bed with a childhood fever, winged beings guarded her; bullied and friendless at school, she ate lunch silently under the steps of St. Theresa’s with the ghost of a nun; paralyzed with fear, she woke each night to see a man with no eyes, watching her; and she kept watch at the window, every day, while her real father was at work and Steve, her other father, was with her mother. It was the 1960s in suburban Staten Island and she tried to hide it all—to silence the spirits, ghosts and her own developing abilities to tap into people’s futures. She tried to be a daughter her mother could love.

Now, with Perdita Finn, Suzan tells the story of her journey in The Reluctant Psychic, and tries to make sense of her mother’s own personal buried secrets that were never acknowledged. She tells of the joy and terror in seeing things others couldn’t and understanding what no one else expected—and the loneliness and sadness of possessing a tremendous gift. Through powerful readings of others’ destinies interwoven with compelling narrative, a reluctant psychic emerges into the light.

Purchase a copy at your local bookstore or online ” The Reluctant Psychic “.