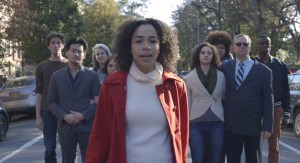 Ian McGregor Moran, co-owner of I to Z Photo + Video and recent graduate of the NYU Tisch Film School, is an innovative videographer and photographer based in New York City. Moran uses his videography and photography for a variety of socially conscious projects and he recently published a new anti-catcalling PSA entitled, “Man Enough”. We received the following statement from the artist.

“Man Enough is a video about accountability and action. It deals with the omnipresent issue of street harassment faced by women around the world. “Street harassment” varies widely – from inappropriate or unwanted comments directed toward females, to physical abuse and rape. Having two older sisters, as well as a beloved mother, I have long been cognizant of catcalling and street harassment. To be silent on the issue is to promote a culture that devalues women and normalizes abuse against them. While some may be put off by Man Enough’s confrontational tone, it purposefully depicts an unapologetic, empowered female figure, played by singer/songwriter Kiah Victoria, to call out both perpetrators and the silent masses to take a stand against street harassment. It is no longer an issue to be taken lightly or spoken about in hushed tones. It’s time for us men to stand alongside our women and make our streets safer for all“.

As head photographer at I to Z Photo + Video, Moran creates an environment in which his clients are comfortable, confident and pleased with their photos. He has provided a countless number of students, artists and professionals with quality materials for their portfolios at outstanding rates, and his socially conscious works are an even greater testament to his ability as a videographer. Visit Ian’s social media sites and watch his anti-catcalling PSA HERE.