Home › Social › Too Good › Women Who Lunch Debuts in the Hudson Valley!

WOMEN WHO LUNCH DEBUTS IN THE HUDSON VALLEY! 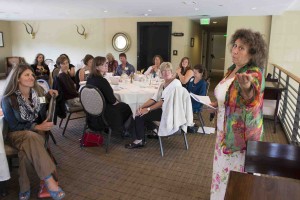 It was a perfect day. The sky was crisp and clear and the sun was shining as women of all ages, from all industries and professions, arrived at The Tavern at Diamond Mills in Saugerties, New York for a professional networking event called Women Who Lunch.

Women Who Lunch is a women’s only networking event produced by the Florence Belsky Charitable Foundation. The Foundation’s mission is “Connecting People, Sharing Ideas, Supporting the Arts.” Women Who Lunch started in 2009 in New York City. Since then, there have been events in Boston and Philadelphia, and now the Hudson Valley. 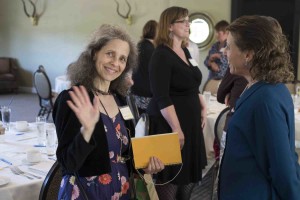 Women Who Lunch enables women to connect with each other in a casual setting. It is open to women of all ages and from all professions. As they dine on a healthy meal, the women are invited to connect with each other in an atmosphere that promotes friendships over business connections. Any business that develops is a bonus but there is an emphasis on making personal connections, which promotes a welcoming and causal ambiance and encourages women to share details about themselves that they might not otherwise share in a networking setting.

On Friday, September 12, 2014, the Hudson Valley hosted it’s first Women Who Lunch and experienced the welcoming event first-hand. As they entered the restaurant, women were greeted by local event organizers, Leslie Malin, Vicki Koenig and Melissa Gibson who made introductions between guests. Once they were invited to sit down, Jill Markowitz, the Associate Director of the Foundation, introduced the event and the local coordinators. 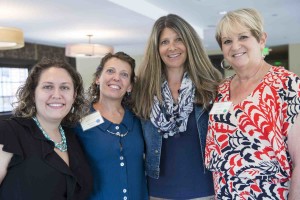 Next, program facilitator Vicki Koenig introduced one of the signature aspects of Women Who Lunch events – the “around the world” introductions. Each woman is given a chance to stand up and speak about herself for thirty seconds. Thirty seconds goes by fast and to ensure that everyone had enough time to speak, Ms. Koenig signaled the end of their time with a Woodstock chime. Even though time for introductions was short, each guest had provided their biography in advance and these were distributed to guests before the lunch so that more information on each attendee was easy to come by.

Melissa Gibson, another Hudson Valley local and frequent attendee of New York City lunches, introduced an icebreaker called “Someone at this table…” Each guest wrote down an interesting fact about themselves on a scrap of paper and these were then mixed up and passed around the table. Everyone read from the card in their hand starting with “someone at this table…” From the master cat namer to the woman who walked in on a robbery and saved the day to the woman who ate a liver and onion sandwich and liked it, each guest added something new and interesting to the conversation. 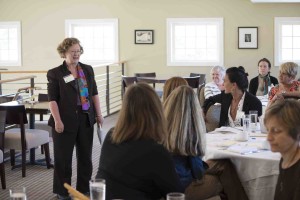 As they dined on a light menu and overlooked the banks of the Esopus River, the women at each table discussed transitions from their own lives, both personal and professional. Coffee and tea was served and a volunteer from each table was asked to sum up the conversation. From the excellent advice that sometimes the best way around the storm is to go through it, to the table that banded together to support its members through a difficult transition, each group had a slightly different takeaway from the discussion.

Event organizer and Hudson Valley local, Leslie Malin, says of the event, “I felt so privileged to be a part of launching Women Who Lunch/Hudson Valley on September 12, 2014.  We hosted the most wonderful, multi-faceted, talented, adventurous and multi-generational group of women. Our conversations on the theme of Transition were deep, meaningful and fascinating. I have heard from many of the attendees who reported how enjoyable and special a day they had.”

The next Women Who Lunch Hudson Valley will take place on November 14, 2014. Details can be found on the Florence Belsky Charitable Foundation’s website.

Imperfect Women of the Bible