Home › Social › Too Good › Never The End of the Road

Never The End of the Road 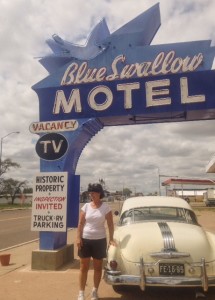 Nancy Meuller in front of her motel, The Blue Swallow.

On the trek from New York to California via Route 66, I was hoping for some kind of personal epiphany and would wake up on the last day with an understanding of why I traveled all this way. Instead I just feel homesick for my life back home and tired of being out of my context. I don’t think this journey has helped me learn very much about myself (that I already didn’t know) but I have learn a lot about others- especially the innovative creativity of American women.
It seemed everywhere I went, I met women who were recreating their lives. From the start, there was the woman who entrusted her car to us to transport from NY to San Francisco. She was reinventing herself from east coast to west coast and our delivery of her car was the last piece in her puzzle to starting over. Another newly relocated friend we visited had been a successful A&R executive of 20 years. The downturn in the music industry forced her to reinvent herself mid-career. Rather than abandon her path, she re-leveraged her professional networks, learned all about social media and is now a digital marketing executive. In Tucumcari, Mary Anne and I met Nancy Meuller who together with her husband and son, uprooted themselves from economically ravaged Michigan and moved to New Mexico. The Meullers had googled properties for sale on Route 66 and found the vintage Blue Swallow Motel, sold everything they had and became innkeepers and restorers of an American icon. 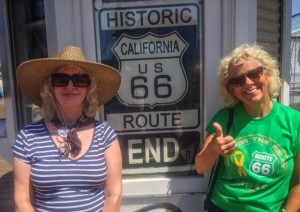 Mary Ann and Jen at the end of Route 66

But to me the most amazing achievements were by the women who were cancer survivors and chose to make this long motorcycle ride from Chicago to Los Angeles. The sun is strong this time of year and as a past radiation patient myself, the UV rays are harsh and enervating. I was protected by a car and air conditioning but immediately felt the blast in my bones every time I stepped out into the September sun. These women on bikes endured this everyday, all day, on the highway through the mountainous deserts and the flat tree-less plains. It was a collective personal marathon that helped these survivors overcome the power that cancer had had in their lives. The collective Route 66 road trip was a cathartic overthrow of the illness and would serve as the turning point for the rest of their lives. It was worth the trip to see the joy in my fellow travelers as they celebrated their personal “finish line” at the end of Route 66 on the Santa Monica pier. Perhaps the lesson for me is that it’s all about the journey and the refusal to allow things out of your control to forever control your life- be it a failed economy, failed marriage or cancer.