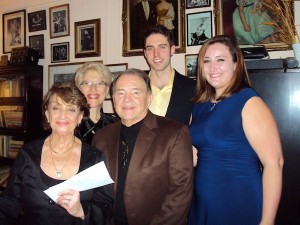 Included in the program is a concert featuring the winners of this year’s International Vocal Competition and the presentation of awards to opera legends, Marilyn Horne and Richard Leech, both of the Metropolitan Opera. Marilyn Horne will be presented with a Lifetime Achievement Award and Richard Leech will receive a Distinguished Achievement Award.

The Giulio Gari Foundationwas established in 2001 as a 501(c)(3) non-profit organization to promote the careers of young opera singers and is dedicated to mentoring and promoting classical singers between the ages of 21 and 35 as they launch their careers. Vocal competition winners are given grants and an introduction to the public at Gari Foundation events to help future generations of classical singers. In so doing, the Foundation is building on the legacy of tenor Giulio Gari (1909-1994), a former esteemed leading tenor of the Metropolitan Opera who always encouraged young singers, and has done much valuable work in its goal of assisting young talented singers to go forward in their careers via grants and scholarships.

Giulio Gari secured his international standing as a “Primo Tenore” from the outset of his brilliant career. Under the baton of the great Tullio Serafin, he made his distinguished operatic debut at the Teatro Reale di Roma in Rossini’s il Barbiere di Siviglia, the success of which was soon followed by the offer of a contract in the United States with the NBC symphony. His talents were immediately recognized by conductor Laszlo Halasz, who not only engaged him for premiere performances of Gian Carlo Menotti’s Amelia al Ballo, but for eight seasons as an essential leading tenor at the New York City opera. The list of his colleagues is literally a “Who’s Who” in the world of Classical Music. The foundation, now headed by Giulo’s widow Gloria Gari also hosts an annual vocal competition where winners are awarded grants and introduced to audiences.

Past winners of this foundation award have gone on to sing at some of the most prestigious opera houses in the world. Future opera stars perform at the Foundation Gala, alongside honored opera stars of the past.

“It’s important to help the upcoming young singers and to expand the voice of opera to new generations as a mission of our foundation. It is for this reason that we raise money to provide annual grants and awards and introduce the new singers to conductors and managers.” states Chairman of the Board of Directors of the Foundation, Ms. Gloria Gari. “The Foundation is helping singers along as well as the opera world, so that the future of opera won’t diminish. We continually strive to provide more help in support of this mission in the name of Giulio Gari, who performed all over the world, and throughout his lifelong career helped young singers develop their careers.”

According to Dan Schneider, Esq., General Counsel for the Foundation, “Gloria Gari’s dedication to supporting the young arts community is unparalleled . She has put together an incredible Board of opera lovers and experts, starting with Artistic Director, Stephen De Maio. The amount of talent at the competition is incredible – and without this foundation these young singers would not be granted the opportunities to sing in front of professionals and scouts, and would be without essential scholarship money for their continued studies. This is an important part of the ecology of the modern opera world and assuring it continues to the next generation”

There are tickets still available, for more information see: http://www.giuliogari.org